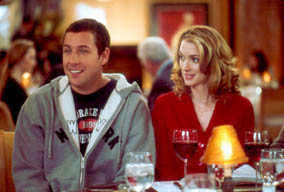 Deeds owns a pizzeria in a small New Hampshire town.  He's a nice guy who goes out of his way to help his neighbors.  Deeds is happy just delivering pizzas and reciting little poems that he hopes to one day sell to Hallmark Cards. All of a sudden his life takes a dramatic change.  He's notified by an executive (Peter Gallagher) that he has inherited $40 billion from an uncle he's never met.

Deeds goes to New York to complete papers transferring his shares of his uncle's company.  While in the big city there are a couple of humorous scenes with Deeds fooling around in his uncle's mansion.  Since Sandler plays the same character over and over again he has the child's mind-in-the-man's-body routine down pat.  He slides down a bannister, yells to hear his own echo in the enormous hallway and goofs off whenever he has the chance.

This starts out as a nice little comedy about a sweet guy, but turns into a slam fest.  It relies on violence for cheep laughs.  A young boy's head is slammed against a handrail in an inept attempt to save him from choking; Deeds beats a pretend mugger to a pulp while Winona and a restaurant worker go at it in a knock-down brawl.  This is funny!?  I don't think so.