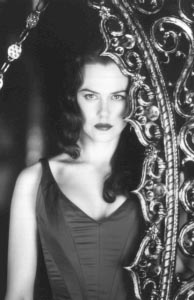 You have to hand it to Baz Luhrmann.  Though his Moulin Rouge lacks a strong dramatic center, a swirling of Busby Berkeley musicals for the new millennium is a chance to witness a spectacular array of production designs and exquisite costumes.  Through the wide-screen sweeping photography of Donald McAlpine, the Australian director of Strictly Ballroom and Romeo and Juliet done slickly in a post-modern MTV slant audaciously blends the old studio musical with the melodramas of the 50's and 60's bathed in a variety of hues.

More film goers attracted to how Luhrmann made Shakespeare hip again through his work with Leonardo DiCaprio and Clare Danes in ways that didn't let the production overshadow the actors, may have difficulty embracing the wide range of pop standards which aims for an eclectic feel.  Perhaps the rebellious pretensions with great detail to historical context may keep viewers distant from the emotional intensity set forth by a luminous Nicole Kidman and an emotional crooning Ewan McGregor.

Taking us into the decadent world of the cancan fin de siecle Paris nightclub known as Moulin Rouge, Luhrmann spectacularly has Kidman's courtesan Satine descending down from a flying trapeze to captivate and snatch McGregor's penniless poet, Christian with tunes like "Diamonds Are A Girl's Best Friend" and "Material Girl."  John Leguizamo is the artistic gnome who helps Christian get into Satine's Indian-styled elephant boudoir and a medley of love songs ranging from "All You Need Is Love" to "Silly Love Songs" gives Paris, at the turn of the 20th century, a musical deconstruction to understand by modern enthusiastic tweaking.

Thus, from Christina Aguilera, Mya, Pink, and Lil' Kim covering "Lady Marmalade" to Fatboy Slim as a techno cancan, even David Bowie markedly redone by Beck, the narrative is driven by and strongly projected onto with an operatic thrust.  From "Like A Virgin" to "Roxanne" some wit enters into the escalating ominous tone imparted by Luhrmann as a benefit to Sating.

Christian sadly recalls the story of Orpheus as David Bowie sings the moving Nat King Cole tune "Nature Boy" as the conventional story scripted by Luhrmann and Craig Pearce works well for awhile off of the voluptuous, experienced Kidman and the naive and desirous McGregor.

Then, flashback fades to how things turn from Satine's becoming the necessary convenience for Richard Roxburgh's obsessive, un-engaging Duke who'll revive the celebrated dance hall financially as she keeps her word to plump impresario Zidler (Jim Broadbent).  The Duke obviously wants more than the deed to Moulin Rouge.

It all gravitates to opening night as the theatrical and reality come smack dab together as Satine does what she can, hampered by symptoms of consumption, in an epic production that finds solace in a romantic triangle.

Striking spectacles of artifice make for a vortex of dancing, singing, sets, and costumes that visually excites but get the better of the audience who want to experience what's underneath the emotions that fuel the trite, but touching love ballads. Moulin Rouge is a thrilling, but roughly hewn ride that bombastically turns Hollywood upside down through a maniacally creative, colorful collage of drama, music, fashion and humor.  And as the love story never comes to the surface glitter of the visually lush shots, a stunningly almost regal Kidman and a surprisingly energetic rendering by McGregor nearly transcend the extensive mannered caricatures subservient to the dazzling designs of Catherine Martin and the most diverse, if distinctive soundtrack ever produced on celluloid.