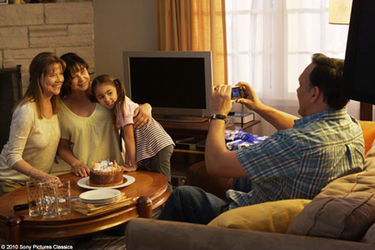 
This potent, but finally predictable contemporary drama revolves around three women: a 50-something woman, the daughter she gave up for adoption 37 years ago, and an African-American woman trying to adopt a child of her own.

It makes sense that Mother and Child comes from writer/director Rodrigo Garcia and has potential to expand beyond large urban venues after Mother's Day Weekend. The film benefits from an estimable ensemble, including Annette Bening, Naomi Watts, Kerry Washington, and Shareeka Epps.

Garcia has an aplomb for embracing the travails assailing those coping with heartache and loss, especially female characters, whether in his small-screen endeavors like "Big Love" or "Six Feet Under" or similarly-themed intersecting, overlapping silver-screen ones like his Nine Lives.

The maturity of the storytelling is often equalled by the helming even if the overrall impact is somewhat muted, perhaps likened to wearing your heart on your sleeve.

Yet, those willing to undertake something often prescient when it comes to not only motherhood, but family and relationships, will mostly be impressed by what unfolds in a shimmering City of Angels.

Bening's Karen is the fulcrum of it all, a kind of pendulum between grief and humor. She can't let go of giving up her offspring which has left her frayed and loathesome as a sort of spinster taking care of an ill mother. Socially reticient to say the least, Karen resists the advances of a caring colleague, Paco (Jimmy Smits).

Watts's Elizabeth hasn't come into contact with Karen, but it's evident that they are bonded by the traits and personality they exhibit. Elizabeth happens to reside and work in Los Angeles as an established lawyer, involved with a married neighbor and her new boss (Samuel L. Jackson) in ways that upend a virile stereotype.

Maybe the least involving of narrative strands includes Washington and Epps, so good in Ray and Half Nelson, respectively. The former wants a baby to start a family with her husband (David Ramsey) through adoption and the latter is facing the challenges of early adulthood and could be the right opportunity for the couple.

Obviously, the distaff side is dominant with increasing emotional returns for those inspired by this sort of melodrama. That doesn't mean that Smits, Jackson, and David Morse as an estranged father don't contribute in their truncated screentime. But, both Oscar-nominated Bening and Watts are the ones who do the heavy lifting with their substantial, finely shaded portraits, with much more going on than just by looking at them. What becomes of the broken-hearted like a stone-cold Karen and Elizabeth who have their neuroses churning, being aggressive in their troubled lives?

Mostly though, Garcia works efficiently with his crew, especially lenser Xavier Perez and editor Steven Weisberg to suffuse Mother and Child with noticeable polish and clarity. Even if the climax and denouement are flabbier and less poignant as ambition outweighs audacity in what slickly specializes in its female touch.