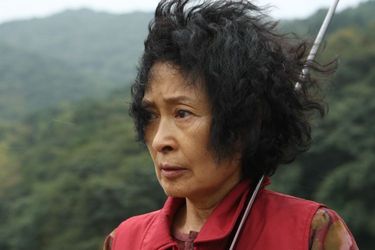 Mother (Madeo, in Korean with English subtitles) has aspects of film noir as it uses imagery to delicately delve in an ominous, trenchant way. It stars Kim Hye-ja and Won Bin in something that richly prioritizes love and suffering.

Dwelling in a tiny hamlet, Hye-ja is the healing mother of a grown-up son, Do-joon (Bin) with some kind of developmental disorder. His child-like demeanor extends to not realizing how his actions may affect others as his mother has been really been very protective of this mentally-challenged young man his entire life. When not watching over Do-joon she has serviced neighbors through her know-how with things like acupuncture and herbs.

The carefully-paced, lushly accoutred yarn from the rapidly maturing Bong Joon-ho (The Host) works on the desperate search of the title character for the killer of Ah-jung, an attractive young student, keeper of the town's darkest secrets. An accused Do-joon is being held by authorities and only a fierce, conventional healer can find out who framed him.

The filmmaker uses pungent satirical strokes in what comes across like an incisive potboiler, but is just as much a psychological examination inasmuch as it questions the capacity of blood relations will take for one another. Hye-ja, a cherished small-screen Korean actress, is more than revelatory, espousing more than sacrificial and unconditional love of someone with a small disability.

Eventually, this untraditional thriller with its placid backdrop allows its emotional undertow to startle even with the filmmaker's familial motifs, as its visual and personal dichtomy within the harrowing sides of its setting makes for one potent mystery.