A Most Violent Year 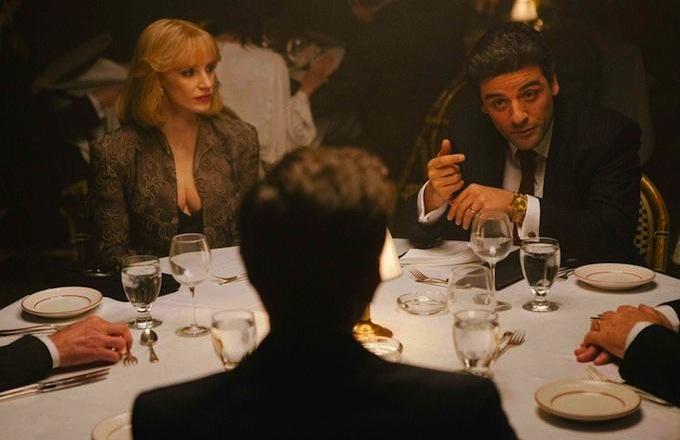 
A slow-burning adult drama set in the Big Apple's worst year of crime, 1981, may be director J.C. Chandor's most audacious, accomplishing outing yet. One with vigor and clarity even if it may not seem as timely as his riveting, soul-searching cutthroat corporate world in his debut, Margin Call.

A Most Violent Year stars Oscar Isaac, Jessica Chastain, and Albert Brooks and hones in on a penetrating morality tale when it comes to the American Dream.

Isaac's Abel Morales is a first-generation immigrant, an upbeat, ambitious heating oil businessman, operating the enterprise with no-nonsense wife Anna (an aggressively fiery Chastain of "Interstellar"), Brooklyn-bred daughter of crime-syndicate boss who dealt him the business. Abel epitomizes what it means to invest your life in your work when it comes to "you've got to spend money to make money."

Abel and Anna are put into a precarious predicament when a deal of a lifetime for choice property near the East River presents itself. It comes after seeing how the self-made Abel has made himself very worker-friendly whether it be sales or driving trucks containing gas. Is it a war against independent oil suppliers as Anna suggests, as his drivers are beaten by unknown assailants and trucks pilfered for the fuel.

Isaac's impressive, awards-worthy characterization after Inside Llewyn Davis for the Coen Bros. pits Abel's views versus Teamsters top brass and Anna who advocates arming the drivers or calling in colleagues of his father to help. Chandor's incisive screenplay includes the domestic strife based on Abel's reluctance to acquiesce which leads to an intruder caught in his home leaving a weapon that Anna finds their daughter subsequently handling the next day.

The impediments to Abel's ideology and tenets forms the thematic core of the struggles amidst ruthlessness when it comes to perilous, high-stakes world in finance. Pressure and apprehension is evident in the atmosphere Chandor creatively constructs and gravitates as it tests one man's fearlessness and identity in a place where the title's meaning is quite palpable. It's difficult for Abel to answer his bemused, patient attorney (a more understated Brooks) about explaining what he truly covets as he becomes more drained in never stopping fighting the hardest battle he's ever fought.

Troubles besieging Abel including the actions of the assistant District Attorney (David Oyelowo of Selma and also Interstellar) who files charges against his company while investigating heating oil operations all but negates a key bank loan from a deposit and the couple scrambling for another subsidizing source that could put their deposit and savings in jeopardy.

The filmmaking definitely respects the substantive, gripping work of Sidney Lumet from the 1970s (like his Prince of the City with Treat Williams and Jerry Orbach among a fine ensemble centering on police corruption) and Isaac's demonstration of suffering and resiliency through Abel may compare to certain aspects Al Pacino's iconic quietly incendiary role of Michael Corleone. And the versatility of the Juilliard trained Chastain (after being in The Tree of Life, The Help, and Taking Shelter, for example) lets her nail Anna with caustic veracity in an honest, quietly chilling A Most Violent Year.