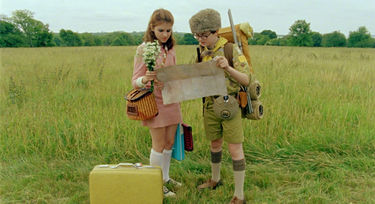 
Another offhandedly charming adventure from Wes Anderson who successfully ventured into animation with The Fantastic Mr. Fox could be too mannered and arch for some audiences though the pathos from its nutty whimsicality of its stylized reality is more identifiable than may be expected.

Moonrise Kingdom (whose meaning comes into play in the latter-going) has the typically formalized visual trappings of Anderson (his first live-action feature since The Darjeeling Limited) which helps to anesthetize the onlooker in a sweetly benign way set on the fictionalized isle New Penzance in New England during late summer of 1965.

A subtly droll approach comes from the auteur's screenwriting in collaboration with actor Roman Coppola, cousin of Jason Schwartzman (here as in nearly all of Anderson's films as a nearby Khaki Scouts leader) as Sam Shakusky (Jared Gilman), a preteen, runs away from a Scout camp at the venerable destination for the scouts. Sam is a wizened orphan not particularly attractive to those in his circle, and has actually taken off with Kara Hayward's Suzy Bishop, daughter of a local legalese couple Walt (Bill Murray) and Laura (Frances McDormand). Edward Norton's Scoutmaster Ward dispatches a search team for their wayward precocious member.

A tender relationship develops between Sam and Suzy with their respective overachieving and curious sides offering a sincere youthful idealism, a persevering naivety in the not-so-remote wilderness that keeps the dogged law enforcement officer Capt. Sharp (Bruce Willis) and Tilda Swinton's "Social Services" on their toes, among others. Even Schwartzman, as well as a colleague (Harvey Keitel) are involved, as well as a posing denizen (Bob Balaban) who provides voice-over.

The look of a picture that locates palpable unsentimental honesty in honing an antiseptic type of schematic from amber, auburn and orange strokes with the former lustrous in fashion still might strain credibility (and be detaching in the process) for some new to the ironic wackiness that usually permeates the Anderson oeuvre. Still, a quaint affecting emotional pull comes from young romance versus adult resignation very articulate on both fronts.

Laura and Capt. Sharp have something going on the side while Ward's acuity may work against his dilemma during the peculiar oscillations of Sam and Suzy's journey. So, the characterizations of Norton, Swinton, Murray and McDormand may not carry the desired feeling or weight given the way of being established into the narrative structure. Yet, the idiosyncratic Anderson brings to the foreground character attitudes and passions mostly resonant on the young counterparts of those distracted by their law work and generally disconsolate existence. With Sam being a pretty high-minded outdoorsman having a battery-operated record player as both he and his companion contemplate their chaste experience, the filmmaking represents a heady combination of slapstick, sensible backstory, and cinematic nods with an appropriate sense of time and place.

There is a naturalness to the distinctive etchings of relative newcomers Gilman and Hayward (with the latter going against the grain of many of her talented counterparts that have been molded into young stars in recent years in Hollywood) that helps make for an enviable headstrong spirit that lifts Moonrise Kingdom into the heartrending realm of an early Anderson film, Rushmore. Even through the final credits scroll, the deliberately unorthodox self-consciousness filled with detailed compositions stirs up understandably uneasy underpinnings that is hardly about reinventing the wheel for the eclectic auteur. One that is embellished with the kind of intensity that warmly splashes a wit and humanity in grinning clever admiration.