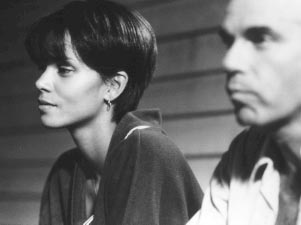 Marc Forster's hard look at the effects of brutality comes forth with poignancy in the scary southern drama Monster's Ball.

There are no supernatural or horror elements in this Georgia set film which allows Billy Bob Thornton and Halle Berry to act in finely measured ways as their characters are oddly linked through a condemned man.

The dark underbelly of Monster's Ball has its place in the refined script from Milo Addica and Will Rokos which is concerned with the lives of two families, one white and the other black.

The Grotowski family is made up of Peter Boyle's Buck, the racists patriarch who lives on an oxygen tank, Thornton's Hank, his son, and Hank's son, Sonny, played by Heath Ledger of A Knight's Tale.  They all have been a part of corrections at the same Georgia penitentiary.

Hank is in charge of leading condemned inmates ready for execution and his methodical techniques recall the same kind of measures implemented in affecting films like The Green Mile and Dead Man Walking.

Sonny disrespects his father and is punched and turns a gun on Hank before their words have a shocking turnabout.  Both of them have had time with the same prostitute, but Hank holds back on the latest encounter.

The cruel fatherly ways are clear as Monster's Ball means a condemned man's execution without a preacher or lawyer.  And Berry's Leticia will oddly impact Hank's life.  She is the widow of a death-row man, who has an obese son and can't make ends meet.  She will come to realize that her husband spent his last hours with Hank and Sonny.

Leticia and Hank first meet at the diner where she's a waitress and where a road-side horror and words by Buck take the relationship into an unexpected direction.  The screenplay keeps the dialogue to a minimum and Thornton and Berry deliver much emotion in powerful, understated parts.

Thornton, like his quiet barber in The Man Who Wasn't There searches into a man who hasn't spent much of his life away from jail.  And it works some raw, effective scenes with Berry whose Leticia becomes unhinged through grief and desperation.

Forster, a Swiss film maker, works persuasively with his lenser as the music complements the images associated with devastation and change in this look into two tortured souls.