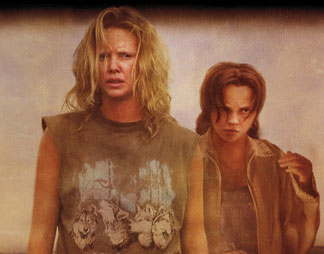 Charlize Theron as serial-killer Aileen Wuornos uses a remarkable physical transformation to make Monster a memorable, if sordid biopic. The former model from South Africa is recognizable from her sultry roles like the recent Italian Job that accentuate her glamour and physical beauty. Nothing she's done before can prepare one for this turn that goes well beyond transformations seen in films like Bridget Jones's Diary and The Hours.

For those unaware of Wuornos, she was a rare type, a whore surviving on Florida highways who killed six men and just last year was executed after a dozen years on death row. Theron brings to life the wretched, volatile woman in ways that exceed the writing and direction by Patty Jenkins. The uptight, trashy white woman probably was brought up with childhood abuse (from 13 on she lived off prostitution) and Jenkins unveils Wuornos' violent descent after a beating and rape. The overlong film builds more of a case for the protagonist's humanity in spite of explicit homicidal recreations with information coming from prison letters, some of which she allowed for public disclosure after her execution.

Much of Monster involves Aileen's relationship with lesbian Selby Wall, done with naive sensitivity by Christina Ricci Anything Else. Wuornos' life seems more to be headed on a better path when they meet in a gay bar. The jittery Aileen says while pointing up "I'm good with the Lord" as Selby wants to understand her creepy, hateful lifestyle. Aileen is attracted to what Selby has, though she states at the outset she is not gay.

Theron has what it takes, with help from the outstanding work of makeup artist Toni G, using thinning hair, a beer belly (she gained 30 pounds for the part), splotchy skin, and oversized teeth, to make one begin to understand what Wuornos endured. That's not to say that Jenkins is going out of her way to paint a picture of a victim. Monster has the feel of two-character docudrama that could probably be effectively adapted to theater. Aileen's loathing runs deep especially after the brutal torture of one of her johns which leads to his shooting and an apologetic slaying of a man (Scott Wilson) just giving her a ride.

Maybe Bruce Dern provides the most able support as Thomas, Aileen's closest male friend and Donna Tentler registers as the aunt with the best of intentions. But if a series of conversations doesn't add up to much from the standpoint of plot and characters, Theron is stunning in a new, desperate way. She embraces stepping out of the commercial limelight, to create a harsh, indelible portrait of a despicable, unseemly condemned women who later claimed she committed the horrible acts in self-defense.