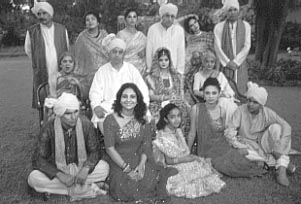 The latest from Indian director Mira Nair has some of the overlapping, cynical touches reminiscent of the estimable Robert Altman (Gosford Park).  She has a passion for her matrimonial subject and performers that often gives more pleasure than it should to audiences seeking joy from an exotic celebration.

Monsoon Wedding is richly balanced between its characters, modernization and the cultural traditions which influence them.  Nair works persuasively with her writer, Sabrina Dhawan, to branch smoothly with symbiotic attentiveness to Declan Quinn's artfully hued camera work.

As Nair gets things underway, an arranged marriage is acquiesced by Aditi (Vasundhara Das) and Hermant (Parvin Dabas) with an important but brief courtship.  The energetic Aditi is trying to get over a recent tryst with her boss and gets to know a Houston-based engineer who happens to want a wife from his native land.  But the aggressive employer can make his unappreciated presence chilling for Aditi.

Throughout much of Monsoon Wedding the mood reflects the resonant, ever changing score with theatrical effect.  And the impending celebration visually touches one like a recurring rainbow.  Yes, Nair has the talents, as in Mississippi Masala, to handle one of the film's more disturbing elements with tenderness which still can't keep its true effervescence corked up very long.

Like Vasundhara Das' characterization, a strong sense of beauty and purity fills this wonderful film which always engages.  Its divisive title notwithstanding, Monsoon Wedding swirls with much more intelligible, enchanting escapism than the majority of its Western cinematic counterparts.