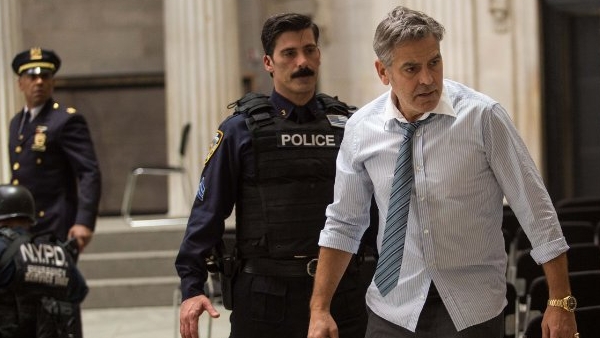 
Director Jodie Foster's thriller stars George Clooney as Lee Gates, a flamboyant, cable TV show host who gives stock tips between dance routines and loud music.  He predicts winners and losers on the market and never thinks of the consequences of his choices.

His program director Patty Fenn (Julia Roberts) is all-business and treats Gates as an overgrown child, but even though she has to continually reign him in, they have a good relationship.

During a live show taping, a young delivery man wanders into the back of the studio. His name is Kyle (Jack O'Connell using a phony New York accent) and he's a working class guy with a gun and two vests rigged with explosives. He's mad and wants not just answers, but also justice.

Kyle demands that Gates puts on one of the vests and that Fenn continue live filming.  Relying on one of Gates" recent on-air recommendations, Kyle took all of his money and invested in the company that overnight goes broke because of a "glitch" in their algorithm.  Kyle doesn't buy it, and he wants answers.

The other vest was brought for CEO (Dominic West) of the company.  He was slated to appear on Gates' show, but canceled at the last minute.

The film is uneven, the bulk of it takes place in the studio and the closeness of that set provides real tension and also allows Clooney a couple of good scenes.  When the action moves outside to the New York streets, the story falls apart.  The police lose control of the dangerous situation and the whole thing is unrealistic and chaotic.