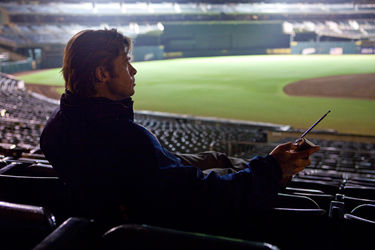 
This new sports drama (based on actual events, of course) from Bennett Miller is witty and moving, if not entirely fulfilling as it imparts some new age "fortune cookie wisdom" into early 21st century baseball philosophy (now referred as 'Saber-metrics'). Its undefined managerial shrewdness may not make it a cinematic plus like Field of Dreams or Bull Durham with an intriguing central characterization left for some interpretation.

Starring Brad Pitt (impressive in The Tree of Life), Jonah Hill, Robin Wright, and Philip Seymour Hoffman, Moneyball (from a Michael Lewis bestseller) crunches out a different kind of classic underdog story in a smoothed-out screenplay by stalwarts Steven Zaillian and Aaron Sorkin (who proficiently penned The Social Network). One that will definitely delight those 'Fantasy' Baseball fanatics.

Pitt, a producer, who believed in the project through its ups and downs, is the focus of the treatment of a mighty institution and the latest technology as divorced unsuccessful major league player turned Oakland A's general manager Billy Beane. It's a versatile, controlled, even subdued embodiment that ends up in an intimate Fenway Park meeting with Boston Red Sox owner John Henry as an offer hangs in the balance.

As the film opens with clips from the team's heartbreaking divisional series loss ten years ago to the New York Yankees (who would go on to the World Series), Billy is contemplating how to stay competitive for the next season with a fraction of the payroll of the elite teams as players like Jason Giambi and Johnny Damon are lost to free agency.

His innovation begins to take form after a meeting with the Cleveland Indians' GM Mark Shapiro and whisking a recent Yale economics grad Peter Brand (Hill) from their offices. Brand comes up with computer calculations to value players who may seem washed-up, but have shown a knack for their ability to get on base. Peter calls this roster melange "an island of misfit toys" in the attachment of the key numbers to the them.

So, Moneyball lets one witness the unlikely rise of the A's in 2002  (with a record 20-game winning streak) and how Billy seems to engage his personal life away from the diamond. What is often like a hardened examination gravitating towards redemption has flashbacks of Beane (Reed Thompson) underachieving from being drafted by the Mets and later playing with the A's before his pro career fizzled out.

Even with an underwritten role, Hill shines in his mostly low-key, geeky portrait as Beane's assistant finding his way into a hierarchy with a unique relationship. The portly actor (who's trimmed down since) raises Pitt's game as one considers a lively sequence when both are on the phone in an office facilitating many trades. Peter's unlikely partnership has him slipping into a part with later dramatic returns, as did his turn in the meagerly budgeted Cyrus.

In this production shakeup and mid-life crisis, Miller (who made the fascinating and poignant Capote) has a way to make many of the conversations and interactions resonate. Hoffman (who won an Oscar as the titular character in Capote) isn't on hand much as ambivalent manager Art Howe looking for more than a one-year contract and Wright has what amounts to a cameo as Beane's ex-wife Sharon. A sweet Kerry Dorsey as musically-inclined teen daughter Casey is more vital to personalizing Billy's reflection and story of a diminished personal life .

The filmmakers aren't that interested in garnering one's interest into the players under scrutiny that Beane helps to revitalize with Chris Pratt as Scott Hatteberg (a catcher turned first baseman) and Stephen Bishop as David Justice (a once great outfielder with the Atlanta Braves) standing out. The craft contributions by lenser Wally Pfister and composer Mychael Danna complement the quiet desperation and struggles to succeed professionally, as well as personally.

As Sorkin did much with lacerating line-readings in an aforementioned film about the evolution of Facebook, it helps inspire some zesty intelligence and cynical humor. The behind-the-scenes maneuvering and shenanigans with early candor around longtime proud scouts is often on the ball. And, with less concern for money and playing off his looks, Pitt charismatically evinces some piercing determination through a history-making team offering a new lease on what not be considered by as many as our national pastime anymore.