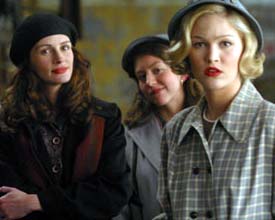 The place is Wellesley College, and it's 1953 as the bohemian Katherine Watson (Julie Roberts) arrives on campus a tall poppy in a field of shrinking violets.

Katherine is an art-history instructor imported from California. With her earlobes dangling turquoise, she lopes into the classroom only to be one-upped by whip-smart conformists wearing cashmere twin-sets and pearl studs. Humbled by her students' encyclopedic knowledge but frustrated they don't challenge received wisdom, Katherine provides the tools for them to change.

She offers them theories from today so they can deconstruct the 1953 dream of only getting married and expand to see greater possibilities in life. Better her students should be freethinkers like Katherine, who runs from intimacy and toward a Ph.D?

She rolls her eyes at those who take poise and elocution seriously, like instructor Nancy Abbey (Marcia Gay Harden, unbelievably moving). Katherine snorts at the marital aspirations of the class bitch, Betty Warren (Kristen Dunst in a thankless role). Only Joan Brandwyn (Julia Stiles) earns Katherine's approbation, because Joan may aspire to professional achievement.

What's most insulting about the conception of the film is for all its talk of woman having the right to make their own direction. Katherine is remarkably intolerant of those who choose a path different than hers. It's difficult to tell whether it is the character speaking or the actress bringing feminism to unenlightened socialites.

Despite Roberts' strong character, there are a handful of excellent performances in the film. Along with Harden, Maggie Gyllenhaal, the free sprit, Stiles and Juliet Stevenson who delivers a remarkably strong performance as the campus doctor who gets into trouble for offering birth control to students.

Having high hopes for a strong film about 50's women and the revolutionary changes which occurred to them a short ten years later, I was a bit disappointed.