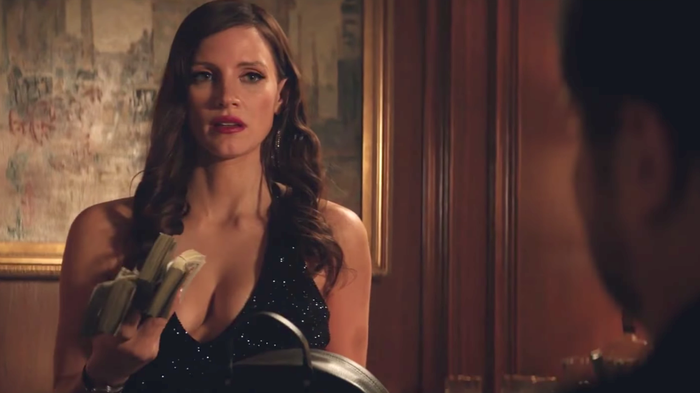 
Slick entertainment from Aaron Sorkin (in his directorial debut) with some unexpected visual flair mainly excels because of what acclaimed alluring actress Jessica Chastain (The Zookeeper's Wife, Miss Sloane, Zero Dark Thirty, Help, just to name a few of her numerous credits) brings to the table. Playing the driven, scheming, as well as self-centered eponymous woman with grit, profiting from her own experiences will certainly put her in drastic territory.

Sorkin's screenplay in Molly's Game isn't his most stellar (if you consider Steve Jobs and The Social Network) and may hold only the interest of upscale or more discerning audiences.

But, the sprawling, if erudite verbosity drawn from Molly Bloom's memoir with a cumbersome subtitle From Hollywood's Elite to Wall Street Billionaire Boys Club, My High-Stakes Adventure in the World of Underground Poker does flourish at times in spite of indulgent writing and effusive narration.

Back-and-forth in chronology of Ms. Bloom (whose more personal proclivities besides a drug habit aren't apparently important if the text stresses empowerment) into a new career of making money after a devastating back injury prevents her from following in the ilk of Lindsey Vonn.

Molly becomes beholden to a sordid Hollywood hustler (Jeremy Strong) who manages illegal poker activities on the side. She'll be unable to remain in L.A., but gets into exclusive high-stakes stuff in the Big Apple before an FBI sting forces her hand once arrested.

Some of the best interludes in this garrulous Game include Molly's meetings with high-priced attorney Charlie Jaffey (Idris Elba of The Mountain Between Us). Charlie cajoles her about her "clients" so a settlement with the prosecution can be reached. Her quandary is juxtaposed with her success as the "poker princess" in the rapid celebrity gaming world (with Michael Cera standing in for the likes of Tobey Maguire). A tenacity and toughness blooms from a psychologist dad (a well-suited Kevin Costner).

Even if Sorkin doesn't play his cards that adeptly which limits the extent to which Chastain's committed effort can really scale emotional truths this biopic doesn't really sell out on its intriguing (if not so thoroughly examined) subject as overpowering and unmanageable as it appears on the silver screen.