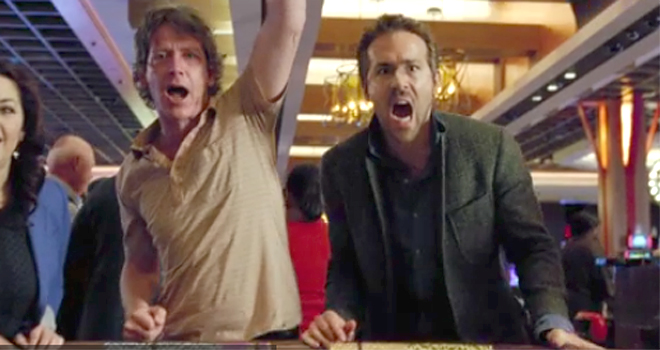 
The fourth feature from writer/director collaborators Anna Boden and Ryan Fleck may be a welcome low-key travelogue contrast to the recent Mark Wahlberg foray The Gambler directed by James Toback (Tyson).

It works mainly in the character and production departments centering on indebted Gerry (Ben Mendelsohn of Killing Them Softly) and Curtis (Ryan Reynolds of Self/Less). The latter providing an appeal in bonding with Gerry to maybe turn his luck around as the Iowa to The Big Easy route leads to a high-stakes poker tourney.

Reynolds' wit and affection comes through in a tale with melancholic underpinnings as "Mississippi" for some will be a grind as motivations and narrative undulations may be overly obfuscated. In tandem with a mature, sensitive effort from the Aussie Mendelsohn (memorable in Animal Kingdom) this intersection of compulsion and restitution has its rewards, mainly in underscoring the "journey" not the destination.

There is tension from characters like Alfre Woodard's aggressive, if benevolent bookie, and the integration of distaff characters played by Sienna Miller and Analeigh Tipton for Curtis and Gerry, respectively, may not strike up the kind of interest expected from personal and professional vicissitudes. Still, Boden and Fleck (who've excelled with Sugar and Half-Nelson in one of Ryan Gosling's best portraits) are exhilarated by its motifs though maybe double-down too much in the final execution as the unlikely pairing of Mendelsohn and Reynolds make it more than a watchable bet.