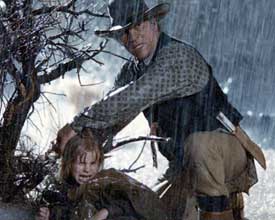 Ron Howard's The Missing takes place during a treacherous time, set in 1880's New Mexico, as the generous director nods toward John Ford's The Searchers.

Blanchett (Veronica Guerin) is Maggie, a 'healer" and rugged frontier woman, with a live-in rancher boyfriend (Aaron Eckhart of The Core). Her oldest daughter from a father we never meet is Lily (Evan Rachel Wood of Thirteen) and youngest is Dot, flawlessly played by Jenna Boyd of Dickie Roberts. Lily wants to get a new life and Dot is eager to be involved with mon's life on the range.

Jones is the enigmatic, long-hair Samuel Jones, who wanders into town. He's not high on Maggie's list, as Jones is the father who abandoned her family for an Apache woman and lifestyle. The wounded man looks for help from Maggie who wants no part of him. But, when Lily is kidnaped by criminals (some Apache) looking to make money by selling young women south of the border, Maggie needs the Apache insight of her wayward dad.

This "one long father-daughter scene" of a movie attempts to delve into what has been (and still is) absent from the lives of Maggie and Jones. It's the drive of a family with nary any aid from local law enforcement or the cavalry. There are tender moments as Maggie and Jones try to open up and a grandfather trying to get to know Dot, who is along on this perilous, violent ride. Blanchett plays well off a mother's fears like the total commitment in The Deep End. Indian tribal spirituality is felt and the precocious Dot wonders about the Indians possibly being contagious.

The incarceration scenes that include Lily are done with harsh authenticity as laid out by Howard who works with his production staff to impart a modern sensibility into it's depravity. Serious tension arises from moments when escape may be a reality. There are some unnerving moments made all the better by the work of young Boyd and especially Blanchett who remains focused and determined, but even with that there appears to be something missing.