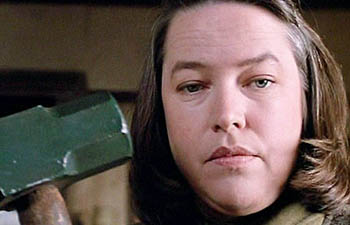 
Victims in thrillers are usually weak or incapacitated in some way; the same holds true in this film, directed by Rob Reiner from Stephen King's novel of the same name. James Caan plays Paul Sheldon, a tremendously popular writer of a series of Gothic novels based on a character, Misery Chastain. He writes at a lodge in the Colorado Mountains.

When finished writing his latest book, he packs up his 1965 Mustang to head back to New York, but a blizzard makes the roads hazardous and his car careens off a cliff. Sheldon is saved by his "number one fan", Annie Wilkes (Kathy Bates) and taken to her remote home to recuperate. Annie, a former nurse, sets Paul's multiple fractures and assures him that when her phone service is restored and the roads are plowed into town, she will have him moved to a hospital...perhaps!

Many of King's books are not successful as movies, because the subtle terror on the page is not translated well to the screen; however Misery is truly thrilling; mainly attributable to Bates, who's a gentle healer one minute and an uncontrollable crazy the next.

This is one nail-biting, edge-of-your-seat thriller that really lives up to its advance notice.