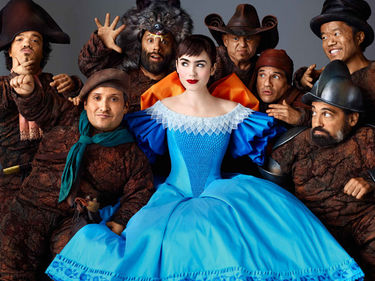 
Director Tarsem Singh's (Immortals) take on the Snow White and the Seven Dwarfs classic is to change things up a bit and aim it at older children and adults.   This version has Snow White rescuing the Prince, wielding a sword and standing up to her stepmother.   Also, instead of the dwarfs being sweet and cuddly, they're thieves who hide out in the forest waiting for their latest victim.

Ever since the King left on a mission ten years ago and never returned, the Queen took over the Kingdom and drove it into debt with her lavish lifestyle.   She banished Snow White to her bedroom and spends her days strutting in elaborate gowns, planning parties and looking into her magical mirror.   She also screams orders at anyone who is unfortunate enough to be within earshot.   However, the brunt of her wrath is saved for her servant (Nathan Lane) and Snow White.

When Snow White's  father was alive, the Villagers who lived on the other side of the dark forest were singing and content.   But, because of the Queen's extravagance, she's taxed them into poverty.   Snow heard the rumors and on her 18th birthday, sneaks out of the castle to investigate.

On her way, she meets up with Prince Alcott (Armie Hammer - J. Edgar).  He's shirtless and hanging upside down from a tree with his servant.   They had been robbed by the Dwarfs, who instead of cutesy names, now go by Wolf, Grub, Grimm, Chuckles, Half-Pint, Napoleon and Butcher.   Snow White cuts him down and even though the Prince is taken with the girl's beauty, they go their own way without knowing they are both royalty.

Prince Alcott shows up all hunky-looking at the castle needing a shirt and shelter.   The Queen, seeing a handsome meal ticket hopes for a quick wedding and she isn't above using black magic to make it happen.    She has no idea that she will have her own stepdaughter as a rival.

The story has great settings, terrific costumes (designed by Eiko Ishioka) sword play and humor. Other than a tasteless beauty treatment involving a bird and a silly attack by giant puppets, it's enjoyable fun for the whole family.