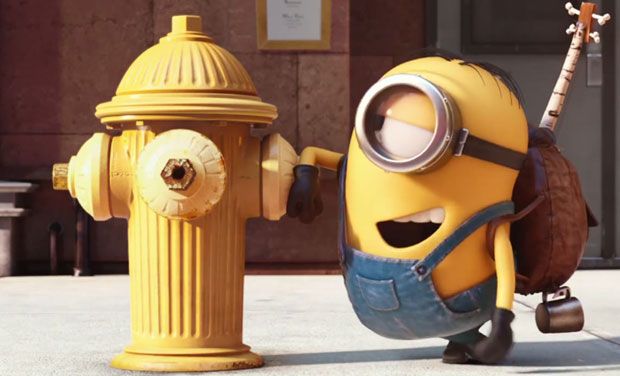 
The Minions have been making money regularly on TV and other commercials, so we must have expected another film dominated by their strange but pleasant language and clumsy actions which result in the opposite result of what they plan.

This prelude gets them up to the first film Despicable Me, following the process in which they free themselves from a dull life in an ice cave that provides little stimulation for the little yellow characters.  Which by the way appear to be all men.  Perhaps the next installment will feature some women to explain their continuing existence.

The Minions are like many comic character in film history, almost everything they touch turns bad from their point of view.  We are treated to a number of their failures early on in the film.  One destroys a dinosaur and another fries Dracula on his 300 plus birthday.  The Minions forget sunlight is not helpful to vampires.  We can't help think of Jerry Lewis in his prime screwing up all situations he became involved in, or perhaps Laurel and Hardy who never won no matter how firmly they tried.

The script takes Kevin, Stuart and Bob to Orlando and then England where their new attractive villain idol Scarlet Overkill played by Sandra Bullock is the star of Villain Con.  She chooses them to help with her next caper and they find themselves assigned to steal the crown from Queen Elizabeth and give it to Scarlet making her the Queen of England. She has dreamed of that goal since childhood.

Music from the 1960 developed by Grammy-winning Musician/Songwriter/Composer Heitor Pereira fills the soundtrack in the Minion babbled dialect.  We hear the Universal Fanfare presented in Minion as the film opens giving us an idea of what to expect.  Pereira also uses "Make Em Laugh," "Hair," "Theme From the Monkees," "Happy Together," and of course "Mellow Yellow."  All of this in Minion voice and language.

It all moves toward a climax that brings the characters to the beginning of the first film and that happens quite effectively.

The Minions keep us smiling, if not laughing and for kids this is one big joke to giggle about.