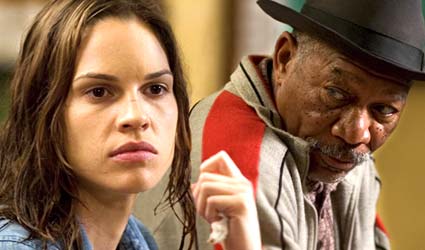 After the lauded Mystic River Clint Eastwood has more to say when it comes to human relationships in Million Dollar Baby. This mainly three-character drama starring himself, Hilary Swank (Insomnia), and Morgan Freeman (Bruce Almighty) transcend the world of boxing in opening up to spirituality.

Eastwood doesn’t go for the driving narrative or production as he works hauntingly from a screenplay by newcomer Paul Haggis taken from a short story collection, “Rope Burns: Stories From the Corner” by Jerry Boyd under the pseudonym of F.X. Toole. Set mostly in a boxing ring environment, Eastwood and his fellow starring actors make these gym denizens convincing tragic figures.

Based on Boyd, himself a fight manager and longtime cut man, Eastwood’s Frankie Drunn is estranged from his only daughter for unexplained reasons. He operates out of a downtown L.A. gym surrounded by boxers and Freeman’s "Scrap," an ex-fighter who keeps the place in good condition.

Though Frankie attends church on a daily basis mostly to bicker with Father Horvak (Brian O’Byrne), he’s not a devout Catholic by any means. Frankie doesn’t want to have time to train a “girlie” like Swank’s feisty hillbilly from the Ozarks, Maggie Fitzgerald. Being 31, she’s considered too old, but she trains at Frankie’s gym for a year with periodic advice from the sagely Scrap.

Frankie eventually warms to Maggie though their relationship is hardly smooth sailing and all their passionately dedicated work pays off in a championship bout against Billie “The Blue Bear” (four-time World Champion Lucia Rijker) staged at L.A.’s Grand Olympic Auditorium. The voice-over narration by Scrap will take on a different tone once things suddenly move beyond the squared circle.

Million Dollar Baby becomes a humbling account of forgiveness and human dignity as Eastwood has more to say under the surface of Maggie’s exploitative trailer-trash existence and what aspiring boxers like the mentally-challenged Danger Barch (Jay Baruchel) are going through. Frankie’s cautious mind set came from the memories of Scrap’s last fight where as a cut man he saw his friend lose an eye and allowed him to suffer excessively.

The events don’t have Rocky overtones to them as the bond between Frankie and Scrap becomes more deeply felt, and how love and redemption attracts Maggie and Frankie in ways they never expected. The boxing scenes may be somewhat repetitive, but they are quickly effective in order to get the desired emotion across.

The seasoned pro, also credited as a producer, offers dirge-like guitar riffs, and works in sharp, sometimes self-conscious strokes with his designer that features beat-up sets and the lighting is shaded to help bring a quality to a film that could have been set in a number of different eras. But, Eastwood’s baby allows Swank to give definition to a woman experiencing firsthand what it’s like being in a heavily male-dominated sport. And her athletic training is physically evident, and her muscular performance really comes together with the rock-solid Freeman and in Maggie’s final scenes with Eastwood who finally becomes an affecting grizzled trainer.