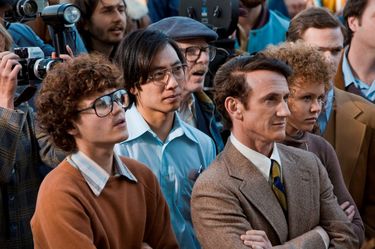 
The involving, richly researched Milk interestingly looks at the civil rights through a San Francisco gay rights politician in the 1970s. Harvey Milk was the first openly gay man elected to public office on his fourth try and was later assassinated by clean-cut supervisor Dan White at the age of 48.

The picture by Gus Van Sant scripted with shrewd nuance by Dustin Lance Black has cross-cultural appeal, perhaps his most mainstream work since the absorbing Finding Forrester. The flashbacking harkens back to Milk's last years, from 1972-1978.

Here, Sean Penn is in top form as the titular, prescient character in a biopic that ranges from a love story to socio-political expose. With a made-up elongated nose, his face is thinned out which may make him a little less recognizable at the outset; yet the charm of a man who finally claims "you gotta give 'em hope" is apparent. Penn's attention to gentle provocation as Harvey Milk even has more of a payoff than in similarly lower-budget efforts where he brought much physical and emotional attachment to the characters like The Assassination of Richard Nixon.

Black and Van Sant work diligently to capture the daily milieu of a vibrant man that gives it a docudrama feel. Old footage at the start makes a vivid reminder of the harassment not so long ago, including New York's Stonewall Riots. The framing means is a taped message by Harvey after many death threats. It includes his time in San Francisco's Castro district, authentically captured by lenser Harris Savides. After opening a camera shop with frizzy-coiffed lover Scott Smith (James Franco), it would gradually become an important hub for the gay community.

Milk finds much poignancy from its personal approach into ideologies and feelings. Those around Harvey include Emile Hirsch's audacious Cleve Jones and a free-spirited new Mexican lover (Diego Luna), as well as a campaign manager (Alison Pill).

There are some candid, pointed instances captured, whether talking with a Midwestern gay, debilitated kid or with his fellow supervisor Dan White (Josh Brolin) who would eventually take him down. One scene that is set in a foyer between a woozy White and Milk has particular force as Van Sant and Black are able to treat all the characters with sympathy.

There isn't the overriding feeling of propaganda or agitaprop even as Milk can summon explosive moments as an intense motivator in the midst of obstacles in the form of Anita Bryant or the ominous announcement about Mayor Moscone (Victor Garber) and Milk coming from City Hall.

In this poignant look of priming a pump that had has its share of negative ramifications, Luna doesn't come as well as the other supporting actors, seeming a little too offbeat as his Jack entered Harvey's coterie. Franco, however, is into the conflict of being with someone like Harvey who is committed to doing big things. And, Brolin (effective in W.) nicely etches a man who can't handle change coming in social and political circles who Milk believes "may be one of us".

The vanguard Van Sant (who himself is gay) goes more low-key and less ostentatious to let humanity emerge in an honest, personal way. With his crew, Black, and especially Penn, this crafty cinematic diary maybe bogged down occasionally in its coverage of the real events goes the distance from the influence of a progressive, transmigrating man who did so much after 40.