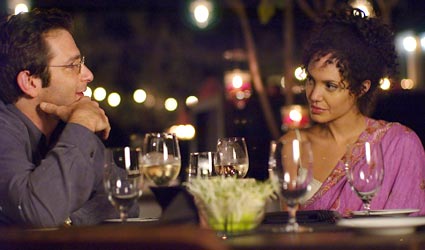 
Even though the Mighty Heart belongs to Daniel Pearl (Dan Futterman), this story written by his widow Mariane (Angelina Jolie) chronicles in documentary form the period of time from Danny's capture to his death as it effects the life of Mariane, her colleagues and a friend journalist Asra (Archie Panjabi), a writer from India.

We are quickly immersed in the crowded jumble excitement and confusion in the city of Karachi Pakistan. Pakistan, on the edge of the volatile Middle East, has leadership which is allied with the United States and a large population which is more comfortable with the theorist world which surrounds and lives in that country. While in that shaky volatile atmosphere Daniel Pearl, a journalist for the Wall Street Journal, was researching a story on the shoe bomber, Richard Reid.

Director Winterbottom displays a chaotic, dark city teaming with vehicles and people as a city on the edge filled with people who may or may not be on one side or another. Pearl dealt with those folks who move into both arenas; it was the only method available to pursue the truthful background for his story. He was a dedicated journalist without fear and without a firm position on either side for his story. But at one point he admits to being Jewish when he could have avoided the answer, he almost innocently does not expect consequences. While reaching out he is lead into captivity and eventual death through a series of contacts which were to lead him to an important interview for his story.

Winterbottom fills the screen with foreboding, we want to yell don't get into the taxi, to ask his wife to stop him from going, we feel as helpless as his wife after he is declared missing.

At the apartment of Asra, Mariane coordinates the search with Pakistan officials, who are sometimes helpful, collogues from his newspaper, U.S. diplomatic folks and the FBI. Astra establishes a chart similar to the style used on "Without A Trace" to follow Danny's movements and the contacts of the contacts of the contacts who are part of the conspiracy to capture Danny. How the two women handle the pain of not knowing and eventual tragedy become the main focus of the film. During the events which take all her breath Mariane is pregnant and very near to giving birth adding pressure to the painful difficult place she has been placed in. Jolie brings insight into a calm analytical process which Mariane follows during the search, that adds drama to the painful powerful expression she falls into when her husband is killed.

The warmth expressed between the husband and wife are emotionally summed up early on when he states that he expects her to get old and look different but as long as she keeps her smile it will be all right with him. That adds to the dramatic heart wrenching performances we see, but in a world filled with people who are driven by faith and fear it is not pleasant to watch.