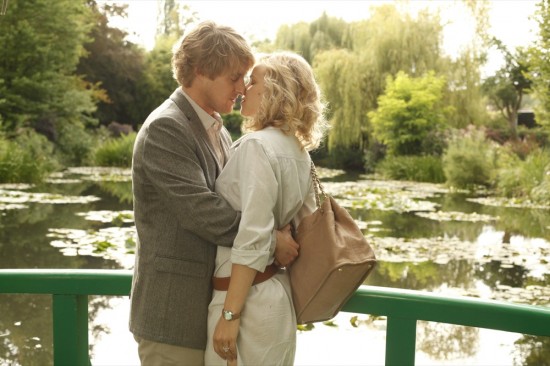 
Woody Allen's latest is a romantic fable that should be met with smiles by his ardent followers and sophisticated art-house cineastes.

Midnight In Paris stars Owen Wilson, Rachel McAdams, Michael Sheen, and Marion Cotillard among his customary well-cast ensembles, and could be considered a sweet melange of two of his more lauded pictures, the more recent Vicky Cristina Barcelona, and The Purple Rose of Cairo.

Here there's more commercial appeal than his more sporadic previous one, You Will Meet A Tall Dark Stranger with a very luminous amber-like palette from the gorgeous lensing of Darius Khondji. There seems to be more inspiration left in the iconic filmmaker who once worked in Paris as a writer and an actor and filmed a segment of his musically charged Everyone Says I Love You there.

Wilson's Gil Pender is an established Hollywood scribe (with idealistic and romantic inclinations) feeling frustrated on a trip to the French capital with his unflattering humoring fiancee, Inez, done with agonizing guile by McAdams. Her disaffection may be what her bourgeois parents (Kurt Fuller, Mimi Kennedy) have impressed on her while abroad on business. And, Gil is bothered by the presence of Inez's very "knowledgeable" old friend acted with sharp sententiousness by Sheen (who's now McAdams's new off-screen beau).

So, as the latest (and decent) Allen surrogate looking to expand his horizons as a novelist (wary of potential criticism about a manuscript of a character immersed in a bygone "Golden Age") gets a chance to confront his insecurities and nostalgic pinning when picked up by partygoers in a vintage '20s automobile by carousers while ambling in Montmartre.

An ode to the City of Lights with its striking tourist attractions really lifts off as unobtrusive greetings provide recurring magical interludes (when the Charleston and Big Bands flourished)  with Gil schmoozing with the likes of Zelda Fitzgerald (Alison Pill), Gertrude Stein (Kathy Bates), an earnest Ernest Hemingway (Corey Stoll) among lookalikes of stalwarts like Buniel, Picasso, and Faulkner. French first lady Carla Bruni appears in three scenes as an amusing tour guide. The comely Marion Cotillard (Nine and another Oscar winner in this group) is the very supportive muse-like Adriana who senses the intellect in the prose of the man who doubts himself like many of Allen's alter egos.

Already having some provincial familiarity, Gil can't get Inez into a portal which ultimately leads to a revelation about another life perhaps being better than what is wallowing from the present. Allen makes good on this propitious fantasy when the top brass of writers, artists, and musicians hobnobbed in a stylish take on reality versus illusion.

Wilson, perhaps the lone bright spot in the recent How Do You Know, works from his usual shaggy laid-back persona to fashion an engaging diffident side to Gil's confused condition. So, there is affection to those he's up against during better times, as Bates, Pill, Stoll, and Brody offer various doses of wit to help the protagonist's vainglorious struggle.

What almost seems like an offshoot of the poignant omnibus Paris, Je T'Amie has Allen using the right amount of magic realism in a polished production with some fine tunes from the Jazz Age. What still might be considered one of his less important trifles works just as well on a travelogue basis through the sunshine and soaking rain, but what could have been mostly manipulative, sporadically entertaining and self-aggrandizing turns out to swoon in a slick, snappy way that continually brightens an already pretty Paris.