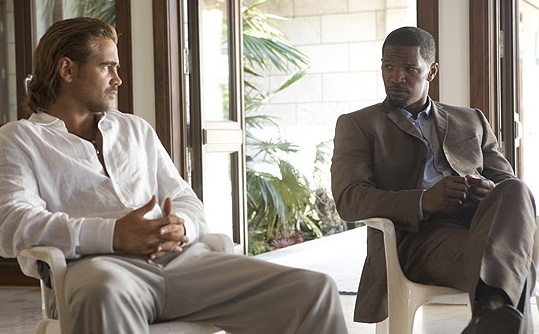 
Writer/director Michael Mann gave us the slick cop-buddy action series of the 1980s, and although there's a big change in the look and tone of this film, it's still an entertaining enterprise.

Colin Farrell plays detective Sonny Crockett and Jamie Foxx is detective Ricardo Tubbs, partners on the Miami drug scene. They might not sport the pastel T's and sock-less loafers like their predecessors Don Johnson and Philip Michale Thomas, but they do drive fast boats, expensive cars, sleek planes and interact with informers and drug dealers.

The film opens with an informer's cover being blown and agents gunned down in a realistic shooting. Crockett and Tubbs go undercover to Paraguay to try to nab the big-time drug dealer Montoya (Luis Tosar) who they think was behind the hit.

With Crockett's slicked-back long hair and bushy mustache, he fits right in with the other dealers and low life's. Tubbs is less flashy and unfortunately Foxx is give a smaller role.

Both men have love interests. Tubbs has a relationship with another detective and Sonny starts up with Montoya's financial partner Isabella (Gong Li). Li's a real beauty with a hard edge, but it's often difficult to understand her thick accent.

The story takes place mostly at night or in darkened rooms, and they talk is as fast and furious as the "go-fast boats" they drive. There's a terrific climatic shoot out which brings all of the characters together in a big Heat like showdown.

Although the film isn't as campy and fun as the original TV series, it's still a stylish thriller with interesting characters, good music and sexy leads.