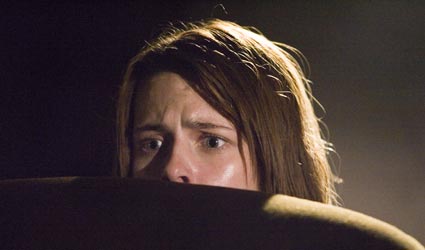 
A derivative ghost story that appears to owe a lot to Poltergeist and The Amityville Horror is directed with some flair by the (identical twins) Pang Brothers (writers of "Infernal Affairs" which recently was American-ized into Oscar nominee The Departed). They even do some Hitchcock styling from The Birds.

The opening takes place on an eerily dark night in the same home where a new family with have to deal with that same sinister presence.

Given its rating, the directors have to make their "horror" come across with less of a visceral impact which is somewhat of a relief. In an eroding North Dakota farmhouse the Solomons start anew with dreams of sunflower crops.

The idle dad Roy (Dylan McDermott) wants to set an example for his family, including wife Denise (Penelope Ann Miller). They have to deal with their unhappy teenager Jess (a plucky Kristen Stewart of Panic Room). Their other child, toddler Ben (played by twins Theodore and Evan Turner), seems normal, except for his absence of talking to anyone.

John Corbett has an odd, supporting role as an itinerant worker taken in by Roy in his wish to raise sunflowers, allowed to dwell on the property and cultivate the land. In "Boogeyman" style, the paranormal occurs from the viewpoint of Ben and Jess, as plan of sudden shocks appear in the old house.

Maybe the Pangs do best when the sound effects are drowned out for ambient effect, but their eye for original creepy cinema for U.S. audiences is hardly original. Perhaps their next effort, a remake of their Japanese hit The Eye might be something to crow more about.