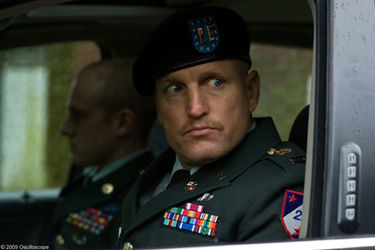 
Fallout from the ongoing Iraq War is done with sensitivity and empathy in The Messenger.

Foster, way up from the preposterous sci-fi horror opus Pandorum, is a returning wounded vet, Army Staff Sargent, Will Montgomery, assigned as an Army Casualty Notification Officer. Will is paired with loyal career soldier Captain Tony Stone (Harrelson, enjoyable in Zombieland) who sets him up to have the wherewithal to deal with this kind of job regarding death during military service.

In Moverman and Alessandro Camon's screenplay, the task of Will and Stone and how the latter assists, if not agreeing with his new partner's approach, begins to show how a camraderie and friendship develops. Stone has never been in combat while Montgomery deals with post-traumatic stress while still recovering from his injuries.

The Messenger doesn't get bogged down in a thicket of issues which still has a certain trenchant feel even in the early part of the Obama administration. Both Will and Tony don't balance out their chosen, commanded vocation with their personal lives, as the latter has fleeting encounters while Will has relations with his former girlfriend (Malone). Complications ensue when Will becomes close to a fallen officer's widow (Morton).

A functional production may be a little self-conscious in the images projected in cinemascope, but delicately accounts for the detailed circumstances between the very physically-fit officers. Malone and Morton may be shortchanged a bit in this good two-handler that puts stressful assignments seen in Saving Private Ryan and We Were Soldiers as its primary subject matter.