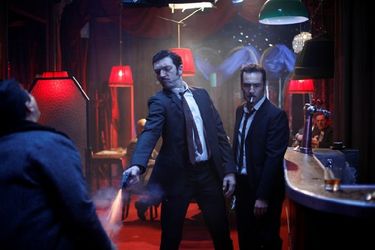 
An acclaimed French import chronicles one of its most compelling outlaws, Jacques Mesrine.

An edgy, frantic Mesrine: Killer Instinct (in French with English subtitles) is the first of two parts carried by Vincent Cassel's mean moustached titular character, perhaps told primarily too much in surface terms.

The direction of Jean-Francois Richet (who did the remake of Assault on Precinct 13) provides certain visceral, pulsating rewards. The filmmaking appears to match the fiery charisma of someone later to be known as "Public Enemy Number 1."

This bold beginning to a vivid odyssey has some flamboyance into cruelty, romanticism, as well as the tragic, mostly set in the 1960s. From his military time in Algeria to learning under wicked kingpin Guido (Gerard Depardieu), a fierce, criminal mind is set in motion.

The divided storyline includes his first two wives, a senorita in Sofia (Elena Anaya) and Jeanne (Cecile DeFrance). Mesrine's lurid derring-do land him in prison, but his confidence to upend the law offers a rush with Jeanne, her Bonnie to his Clyde.

It's hard to dispute that Cassel (Ocean's 13, Eastern Promises) doesn't smoothly ease into a ruthless, magnetic steely force of nature as some nifty imagery (including those split-screens) within many scenes hold one's attention. He has more than adequate backup from an alluring DeFrance and a beastly Depardieu.

Richet and scribe Abdel Raouf Dafri may not be that concerned about what kind of moral ambiguity may engulf such a robust renegade, especially when it concerns those closest to him. Yet, the instinct in this note-perfect detailed Killer with its populated, eventful stream has much bravado, outrageousness and wild escapes going for it - lock, stock and loaded barrel.