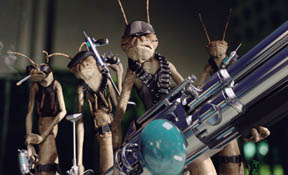 It's been five years since we last saw Jay (Will Smith) and Kay (Tommy Lee Jones) with their black suits, sunglasses and giant chrome guns, protecting the world from aliens.

This time around, Jay is having trouble keeping a partner since Kay retired to become Postmaster of Turo, MA.  His latest partner is Frank, a cute little Pug dog that talks with a New York accent and sings "Who Let the Dogs Out" while sticking his head out of the car window.

Jay gets a chance to get his old partner back when an evil she-devil alien (Lara Flynn Boyle) with Medusa-like snakes shooting from her arms, threatens to be a problem.  It's a case that Kay had once worked on, so he is needed back on the job.

The only difficulty is that Kay was neuralized (remember - that's when all memory of alien related info is forever erased by a bright light) when he retired from the MIB force.

Jay has to quickly bring Kay back into the fold, so he swaps his postal uniform for a spiffy black suit and visits a secret arsenal where he is armed with a sporty alien vaporizer, and before we can say "worm people," everything comes back to Kay.

Men In Black was a Cadillac of comedy sci-fi films.  Filled with fun and excitement and scenes of new creatures that appeared everywhere the heroes turned.  There are a lot of strange looking aliens here also, but they're expected and therefore not as unique.

The worm people that chatter while posing their bodies into pretzel like fashion are fun, as is Frank the Pug, but Boyle as the main evil force has one facial expression, boredom.

The Men In Black may be back, but they seem to have lost some of their "cool."