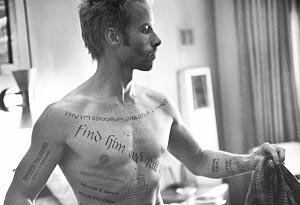 For nearly the entire picture, this carefully calibrated, non-linear tale proves to be delightfully cryptic.  A clever conundrum, another LA-set noir-thriller that is authentic and on the outskirts, as the sunshine beats down the pervading unnerving tone that is underlined by a brooding clamoring score.

Guy Pierce, the actor from "down under" who played so well off Russell Crowe's hard edged cop in LA Confidential, offers up a memorable performance as an ex-insurance investigator trying to find out who murdered his wife.  But this well detailed drama has brainy ways through editing and camera work that take us into the mind of a protagonist whose anxieties come from that fateful night while trying to save his wife.  He's afflicted with short-term memory loss, his brain processing messages differently after being struck over the head.

The nifty opening credit introduction fits the suffering and problems faced by Leonard (Pierce) who is unable to retain his latest memories after the impugning.  Director Christopher Nolan under develops a Polaroid photo of a body prone on concrete as a hand is shown holding the picture in a striking murderous prelude to a meticulously drawn out retracing of episodes.

Pearce dexterously poises Leonard with placid wretchedness as Nolan's narrator is hard to stick with considering his inner conflict and unique condition.  Two co-stars of The Matrix, Carrie Anne Moss and Joe Pantoliano, are two of the acquaintances whom Leonard meets during his seemingly mission impossible.  As a sexy barmaid, Moss's Natalie is a true femme fatale who gets under the covers with him and into his head.  Pantoliano is a sneaky private eye called Teddy.  Like Leonard, it's hard for the viewer to trust any of the strangers he encounters and the fun for the audience persists within his doomed emotional state, not recalling within minutes what actions he has taken.

Once Memento gets going in its backward format, the absorbing narrative breaks down space and time moving forward and sideways, challenging the nimble, most attentive on-looker.  Nolan's crafty follow-up to his little seen debut Following is a dizzying twist on the circular pattern devised by Quentin Tarentino in Pulp Fiction.  And Nolan gets astute editorial work from Dody Dorn as Leonard's new memories fade, and swift transitions move scenes from color to black and white and vice versa.

Nolan isn't using mirrors or is he?  His fresh turn on a revenge tale would be admired by Hitchcock as Leonard probably feels surrounded like Cary Grant in North By Northwest.  This bravura reversing trip is a bizarre, yet fantastic one.  A confounding high note in a murder mystery that's as visually stunning as Dead Again, with more intricacy that has the ingenuity and touch to shoot back to death, again.