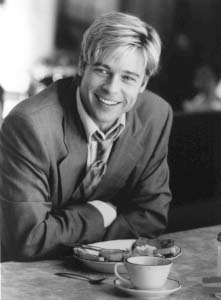 If you are fond of romantic tearjerkers, this one is for you.

Based on the play Death Takes A Holiday and the 1934 Fredric March film, Anthony Hopkins and Brad Pitt star in this three hour version.

Death takes over the body of a young man (Pitt) who shows up at media mogul Bill Parrish's (Hopkins) mansion.  Before he cuts short Parrish's life, "Death" wants to learn from him.

Pitt's character, Joe Black starts out animated, happy and confident, after death takes over, he's stilted and unemotional.  He is very good portraying both personalities.

Death never leaves Parrish's side and when forced to introduce his new best friend, he comes up with the name of Joe Black.  Parrish goes to work, conducts board meetings and has dinner with his family.  Everywhere he goes, Joe Black goes with him.

Rich, powerful men are usually portrayed as heartless and self absorbed.  Parrish, on the other hand, is principled, decent and loving - a nice change; because he's so likeable, it's more difficult to accept his fate.

Watching Forlani and Pitt together is like viewing a beautiful painting come to life.  Their acting makes it all the more pleasurable.  The relationship is sweet and very romantic.

Hopkins once again gives a powerful and charismatic performance.  That you focus on him when he's sharing the screen with Brad Pitt, is evidence of his total star power.

Some may find the film a bit slow, but I savored every minute of it.

It is rated PG-13 for a brief, discreet sex scene and language.