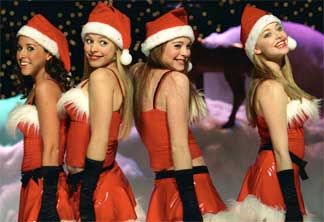 Mean Girls has rising actress Lindsay Lohan rebounding after the huge misfire Confessions of a Teenage Drama Queen under the direction of Mark Waters, who helped her and Jamie Lee Curtis to much success in last year’s Freaky Friday.

The “Saturday Night Live” umbrella hanging over the proceedings includes debut screenwriter Tina Fey who is in the cast as the part of math teacher Ms. Norbury. Known for her “Weekend Update” segments on SNL. Fey has created something edgy and often amusing when it comes to girls and social cliques. Her script and Waters’ unforced direction almost clicks as much as Clueless with eclectic ardor supplied by costume designer Mary Jane Fort and music from Rolfe Kent.

Fey deftly explores sociologist Rosalind Wiseman’s nonfiction bestseller, “Queen Bees and Wannabees” (with a long subtitle to it) for much of the movie that gives Lohan a chance to dig into the espionage of adolescence. Only at the important group therapy session conducted by Ms Norbury does Mean Girls become pressing and less fun, even for the target audience who empathize the most with Lohan’s Cady Heron.

Cady’s zoologist parents have relocated from Africa to a suburb of Chicago. Thus, she’s socially absent when she arrives at the North Shore high school and becomes affected in no time by the role-playing that Fey draws from Wiseman. Included, among others, are the Queen Bee, The sidekick, The Banker, The Target, The Torn Bystander, and The Floater. Her schooling in Africa lets her compare activities in the bush with that high school in some dreamy flashers.

Early on, Cady is befriended by unpopular types like the Goth-looking Janis (Lizzy Caplan) and the outed Damian (Daniel Franzese). They are into art but loathe cliques, like The Plastics, led by Queen Bee Regina, acted with charisma and toughness by Rachel McAdams (The Hot Chick). Fey’s plotting includes Cady’s machinations as she’s accepted by Regina and her self-serving flattering Sidekicks, Karen (Amanda Seyfried) and Gretchen (Lacey Chabert) and the response by Janis and Damian to unseat the intimidating Regina.

A queen of mean is Cady as she gets her first high school crush on Regina’s ex-boyfriend, Aaron, the BMOC, done by a likeable Jonathan Bennett. Walters works again with Lohan to solid effect in transitioning from the life of a Mathlete and a Plastic, able to pivot off of varying personalities, finding a humanity eventually from another fish-out-of-water scenario.

As for the adults, even if Fey has written herself in a straight-man role, she gets decent work from SNL alumni like Ana Gasteyer and Tim Meadows as Cady’s mom and Principal Duvall who sports a cast on his wrist. Current cast member Amy Poehler from Deuce Bigalow and now in Envy, steals her scenes as Regina’s alcoholic, mini-skirted mother, Mrs. George.

Overall, prior to its fractured conclusion Mean Girls dupes the conventions of much of its ilk without unveiling a darker side like Heathers and the excellent Election. But it has a sparkle and savvy in balancing comedy from diverse actors who recognize what is fashionable and trendsetting for today’s high schoolers. Perhaps Fey will get some more movie offers as she continues being the top winter on SNL from her ability to tap into the feelings of her young characters. And Lohan probably wouldn’t mind embarking on another comedic journey with Waters who’s not likely to let her get trapped in teen swill.