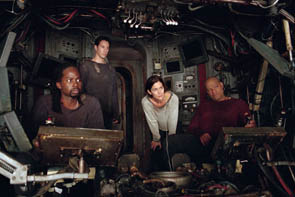 The last human city, Zion, has been discovered by the machines.  Though well hidden at the core of the Earth, squiddies soon attack.  Neo (Keanu Reeves) rushes to prevent the attack on the only remaining unplugged humans on the planet.  Even the all powerful Neo needs a little help from his friends and Morpheus (Laurence Fishburne) and Trinity (Carrie-Ann Moss) join in the fray.  Neo battles Agent Smith (Hugo Weaving) and his clones as well as evil twins and many other enemies.

While Neo tries to further his relationship with Trinity, he is plagued by a premonition of her death. Throughout the film, the battle of emotions and machines wages.  Seems even Neo has his limits of body and soul when it comes to love.  Even the Oracle (Gloria Foster) can provide no insight as to the resolution of saving Trinity or mankind.  Trust in the fact that all is fluid in the Matrix and only in the end will all come to be.

Matrix Reloaded raises the special effects bar and the story is superb.  While there is humor, you feel the threats and urgency as this film prepares you for the third chapter in the series: The Matrix Revolutions.

In short be prepared to be amused, amazed and most importantly excited about this film and the final chapter in the Matrix saga.  This is a must see of this summers blockbusters!