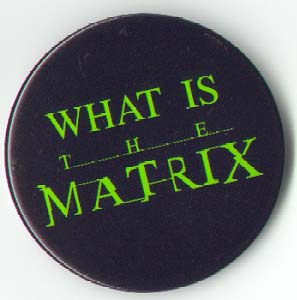 From the beginning we know The Matrix is a fantasy treat.  Neo (Keanu Reeves) begins by chasing the white rabbit through cyberspace and finds the rabbit tattooed on the back of Trinity (Carrie- Anne Moss).  She leads him through a vast new world controlled by techno creatures who farm humans for electrical energy in pods reminiscent of Brave New World.

In this world the men in black are the aliens and Morpheus (Laurence Fishburne) using his voice like James Earl Jones implants a shunt in the neck of his followers very much like the penetrating needle used by the invaders from Mars, from which they are connected to the inner space world of computer virtual reality or perhaps true reality.

In this world of liquid soylent green, the choice of blue or red can change the world as it is known.  Kronis in 1957 has the same basic plot: an accumulator from space captures the energy from the Earth for aliens.  The difference in The Matrix is money for special effects by John Gaeta, particularly those similar to the Gap commercials are extraordinary and very effective.  The battle between human and AI (artificial intelligence) is carried on in the artificial world of FX.

Kung Fu Choreographer, Yuen Wo Ping creates a vibrant stunning dance for Reeves and Fishburn to perform.  Using stop and go motion, long jumps and slow and fast motion he turns the standard drab chop and kick performance into a world of excitement and beauty.

With reality on hold anything can happen, the characters can be returned to Morpheus' floating control machine by picking up a dial telephone which is their porthole to safety. Superman just changed his clothes in a phone booth and became a new being.  Neo is the twenty second century messiah reaching for the oracle.  He must work in a black and white world in which the lady In red is a man in black, children bend spoons with their minds, the body snatchers take everyone, Johnny Mnemoic controls the Earth, Neo has the speed to dodge bullets and Trinity believes Neo will win the showdown at high noon.

If you can imagine a world in the hands of Keanu Reeves, it's safe to ride The Matrix bus.