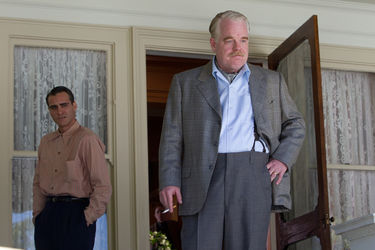 
Oddly enthralling melodrama from Paul Thomas Anderson evocatively shot in 70 mm (which means it's a must-see for theatergoers privy to this multiplex format) pits powerful inveigler and carouser against a deviant sailor in post World War II. Could this be a sequel to his ultimately more persuasive portrait of a profiting sociopathic oilman in There Will Be Blood? It's not as linear a representation in its analysis of  "processing" but has an inviting innuendo to equally provide a richness to such an alliance where greed, exploitation and acceptable come into play.

The Master stars Philip Seymour Hoffman, Joaquin Phoenix, and Amy Adams, as 'The Cause' and Hoffman's patriarch Lancaster Dodd (a theorist insistent at least a scientist and writer) appears to be patterned after Scientology and its eccentric ducat, L. Ron Hubbard.

The filmmaking again carries much solemn, audacious weight to it for audiences wishing to be caught up in its warped delusions of grandeur through integration of a salient sociopolitical climate with psychological and emotional ramifications.

Dodd has that intense ebullience that Hoffman propagates to great advantage during a period fueled by uncertainty. Phoenix, in a credible comeback of sorts after Two Lovers and Walk The Line, is the unpredictable Freddie Quell who is the crucial link to Dodd's new order.

An obsessive, unstable Navy man splurges on a beach with cohorts with a detached aura that Phoenix makes all his own. Then, aboard a wedding ship Freddie is retained by the red-nosed Dodd into a finely fanatical artifice. Drawn into this inner circle doesn't quell Freddie's penchant for realizing his nasty neuroses with each needing one another, but challenging in ways that prove disturbing.

Anderson, the maker of  magnum omnibuses like Magnolia and Boogie Nights brings an enigmatic layered intimacy through deep-hued focus distant and close-up shots with subtle sonorous strokes by Jonny Greenwood (from the alternative band Radiohead). He keeps this absorbing, if gradually less coherent (especially after a motorcycle jaunt) and tragic portrait vital because of how a driven Hoffman (who finds a way into nearly every one of Anderson's films) and Phoenix engage the mutual resonance of  Dodd and Freddie.

This dynamic (set mostly over part of 1950 later at a Philadelphia residence when Quell isn't recollecting) consistently establishes a strong presence in spite of tonal deficiencies and sometimes rivals the one in Blood (based on an Upton Sinclair novel) with misanthropic Daniel Plainview and Paul and Eli Sunday. An intimate approach still allows for the likes of Adams (who appeared in Doubt opposite Hoffman as Sister James) to convincingly play Dodd's obedient, observant wife, Mary.

The Master reflects a high-caliber finesse behind and in front of the camera that shouldn't be neglected this awards season in an exuberant, if structurally unsound clash of the deft and deranged. One that may cause some like Dodd to respond with sharp disdain while more ardent supporters will be inspired by the filmmaker's incisive, sprawling way into the grassroots of religion.