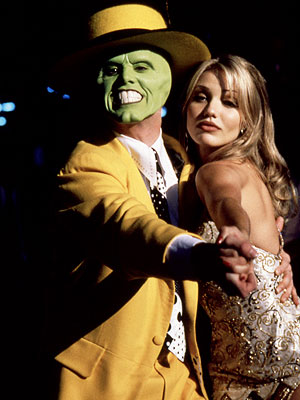 
If you like old cartoons, special effects, superhero comics, Jim Carrey, or small dogs with attitude, The Mask is definitely for you. Possibly this summer's best bet for unrepentant fun. The Mask comes to us from the folks who created Roger Rabbit and the dinosaurs of Jurassic Park, and features a lot of the unpredictable wackiness of the first and a bit of the scariness of the second, though softened by comic overtones.

The film centers on hapless, mild-mannered bank clerk Stanley Ipkiss (Carrey, who, during one of the most pathetic nights of his thus-far extremely pathetic life, finds a mysterious and ancient wooden mask. When he eventually does the obvious (and to anyone who's seen the previews, and knows what will happen it appears to take him forever) and puts the mask on, he becomes the irrepressible, green-faced Mask. Chaos ensures, as Stanley, in the guise of the mask, revenges himself on those who have wronged him, pursues a gorgeous nightclub singer (Cameron Diaz, known to supermarket shoppers as the Cosmopolitan cover model, though she wears somewhat more clothing here), and after several pleasantly unexpected plot turns, confronts Dorian, the film's ultimate bad guy in a free-for-all, during which everyone, including Stanley's dog, Milo, gets to try on the mask.

Carrey, as you will expect if you've seen him on the TV show, In Living Color, is fabulously wild as the more-than-flamboyant mask, and very dull indeed as Stanley Ipkiss.

Though the main star of The Mask is indisputably Carrey, the special effects are what most will go to see, and they don't disappoint. All the sight gags you've come to take for granted in classic cartoons gain a new life when superimposed in a live-action setting. Carrey mixes wonderfully with animation, so much so that it is easy to forget that he isn't managing all those astounding contortions himself.

Those planning on taking young children to this film may wish to reconsider (some purported adults I know found it scary in parts), but certainly it's a big hit with the college-and-younger crowd, and with his college-and-over-movie-goer as well.'