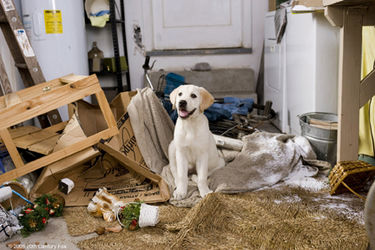 
Marley & Me isn't necessarily the right movie for dog lovers; this uneven tale based on the 2005 John Grogan memoir doesn't coalesce similar to something like My Dog Skip. But, this assured but deceptive movie (if one considers its advertising) highlights man's best friend in family and career terms.

Starring Owen Wilson and Jennifer Aniston, the story of John (Wilson) and Jenny, and their indefatigably untrained yellow lab, named after the famous reggae musician, is one that ambles in a sweet, if overextended manner. It's good to see to hardworking journalists like John and Jenny realize their dream of a home for three kids as well as a lovable, omnivorous pet like Marley.

From the memoir, the couple referred to Marley as the World's Worst Dog. John and Jenny try to keep their sanity through parenthood and dual careers with the mischievous Marley literally chewing away at the scenery in a colorful way. The title clings to a maturity that isn't often reached by so many in life as David Frankel (The Devil Wears Prada) stages it all with enough glossiness to allow for cheekiness and sentiment to find their necessary place. Marley is the reflection of the Grogans' marriage as the family makes a new fine residence in Philadelphia.

It's debatable whether Wilson (in his first part after a reported suicide attempt) and Aniston (staying trim and ageless over 15 years) have better on-screen rapport than they do with the boisterous, winsome lab. But, there's a gracefulness to the various rite of passages in life, even those that humans and dogs share. Eric Dane and Alan Arkin are most notable behind the leads, as a lothario co-worker and dryly funny editor of John's. For the many who've endured what John and Jenny have to in the last reel, Marley & Me ultimately is a personal cry to those who really reflect in the joys and sorrows for any animal, especially a manic Labrador retriever.