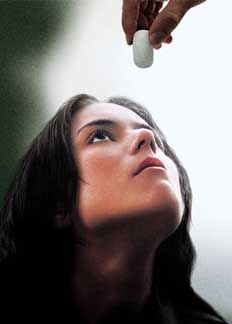 Joshua Marston’s absorbing debut feature, Maria Full of Grace, seems like it might be lifted from a prayer. But, in a low-budget film moving form Columbia to New York City we see the desperation in the life of the titular character, maturely executed by newcomer Catalina Sandino Moreno.

In English and Spanish with English subtitles, “Maria, Llena Eres De Gracia” opens with a rebellious teenage Maria toling on a flower plantation assembly line where she has to wait too long for needed time in the restroom. She is unwed and pregnant, just like her sister, who along with her mother, look to her to provide for them. When she decides to leave the business of trimming in the factory environment, they are mad at her.

Marston gracefully films the dilemma of this meek young woman, whose boyfriend is unable to show the kind of commitment she expects. She turns into the world of drugs when a large financial opportunity comes her way. Many have gotten glimpses of drug “mules” before on the big and small screen, but here it’s done in a compelling manner.

She practices carrying cocaine in her stomach by swallowing big grapes whole, then has to perform the assigned task of holding around seventy capsules which look like they are up to two inches long and an inch wide. Her situation is quite tenuous from a number of standpoints, one of which being a puncture of what rests in her stomach. It’s observed that some of these containers “escape” and are covered with toothpaste before re-ingestion. The drug czars have made sure that if someone like Maria fails to complete the important job there are reinforcements behind her.

Crisp cinematography is abetted by smooth editing throughout leading to a haunting climax and altered state after Maria arrives in the Big Apple. Moreno’s mercurial and resilient qualities are soundly evidenced in ways that overcome any narrative contrivance. And there is an oddly affecting ironic touch that speaks for the intrepid effort of a woman who believes in what really counts and realizes the possible dire consequence of it. Indeed, you have to hail Maria who is full of grace under pressure