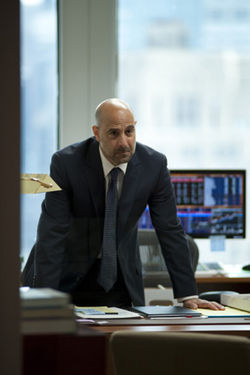 
J.C. Chandor's debut is a thorny, well-written fictionalized drama during the early stages of the economic crisis that has "of the moment" about it given the recent demonstrations against Wall Street.

A discouraging, story-driven Margin Call which has the bustling claustrophobia of films like Wall Street and Boiler Room (and some thematic continuity with a more commercial feature like The Company Men) unfolds over a day at a leading financial (mortgage-based) institution with a solid ensemble, including Jeremy Irons, Kevin Spacey, Paul Bettany, and Stanley Tucci.

In an attractive, surprisingly polished production without being that showy, there's much going on when canny numbers cruncher newbie analyst Peter Sullivan (Zachary Quinto of Star Trek) sees big trouble from shrewd forecasting risk management head Eric Dale (Tucci) after he's one of many laid off from the brokerage.

When multitasking with gum-chewing, trading go-getter supervisor Will Emerson (filled with sharp brio by Bettany) and even higher-up Sam Rogers (an effectively understated Spacey), they situate the company into a collateral damage situation in reaction to its enormously sudden setbacks.

With the aspects of the wavering market and finance a little cold and pretty cerebral, the accruing and brewing of trouble might leave some detached and disoriented before catching on to the idea of not troubleshooting or having a regular quality control program.

Chandor keeps many ideas bristling with tough decision making around its businessmen and women as played by those like Demi Moore, Simon Baker, and Aasif Mandvi under Irons's austere CEO John Tuld (perhaps a cousin of the Craig T. Nelson character from the Ben Affleck/Tommy Lee Jones/Chris Cooper starrer). Peter, Will or Sam could be the film's point-of-view but Quinto, Bettany, and especially Spacey keep their shape their portraits to fit the causes of plummeting to spur inflation, foreclosures, and unemployment to ensemble diversity and effect.

A well-contained Margin Call (reaching ancillary markets for the holidays) has an insidious, insider quality about it as Tucci's disgruntled Dale turns out to be crucial in having more of a reasonable connection to it. Though impressive in its ambitions and calculations about what has fueled a global crisis it sells its high-powered bill of goods with cutthroat theatricality but not with enough verve or insight for the uninitiated for such a fallout.