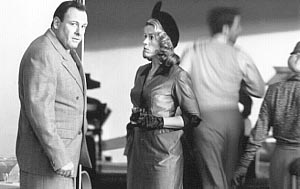 The Man Who Wasn't There

The Coen Brothers' follow-up to O Brother Where Art Thou centers around Billy Bob Thornton's melancholic, quiet barber Ed Crane as the talented, offbeat film makers relocate their smoothly dislocating action from the South to the small town of Santa Rosa in Northern California.

The astute direction of Joel and the writing of Ethan sharply recall the summer of 1949 as Thornton's Crane cuts hair and is the under the employ of his brother-in-law (Michael Badalucco).  Ed gets pulled into a dry-cleaning business scheme of unctuous Creighton Tolliver, a seedy Jon Polito.  It's contingent on the barbering men coming up with $10,000 and Ed fears a double-cross.

Meanwhile, in Ed's personal life, alcoholic wife Doris, coldly embodied by Frances McDormand, is having an affair with Big Dave (James Gandolfini) who is her boss and operates a department store.  Conveniently, Ed is impelled to blackmail the stern proprietor but inadvertently murders him and the well written tale of crime and passion has some unexpected twists.

Joel Coen and David Lynch shared the top directing honors at this year's Cannes Festival and it's clear why, as each frame has much going on like Lynch's weirdly absorbing Mulholland Drive.

In dichotomy to the introspective Ed is Fredd Riedenschneider, Tony Shalhoub's legal eagle defense attorney with much vanity and a hard to pronounce name.  He boasts of "litigating not capitulating."

A second story underneath this pulpy tale which nicely plays homage to Hitchcock's Shadow of a Doubt concerns Ed's relationship with a gifted high school classical piano player, Birdy Abundas, warmly embodied by Scarlett Johansson, late of Ghost World and An American Rhapsody.

The Coens again make their settings stand out from Santa Rosa to Modesto in non-linear fashion which nicely under-plays the conflict through a trip to a family wedding which Ed and Doris attend.

Maybe the film's title has a truth which will probably keep it from being as pleasing as O Brother as the zaniness of three escaped convicts was filled with lively country tunes.  The tension and emotional investment in the characters isn't as palpable for viewers like other efforts from The Coens.

Eventually there is something to be said for regret and remorse as this illuminating monochromatic film noir has an uncanny ability to grow on you.  The Man Who Wasn't There may be hollow, but it consistently abounds in acute subtle ironies and has the cinematic precision of a barber who leaves no doubt of his ability.