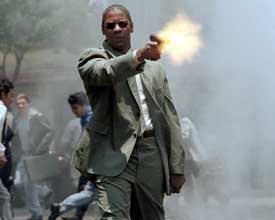 Denzel Washington’s second outing with director Tony Scott isn’t nearly as compelling as Crimson Tide, but Man On Fire burns at length into the modern horrors of abductions through Washington’s portrait of John W. Creasy, an aimless, alcoholic ex-CIA operative.

Creasy shares similarities with other characters created by Washington over recent years, as in Courage Under Fire and his Oscar-winning work Training Day. But the always watchable star has to deal with Tony Scott’s flashy imagery and slick camera work that provides a twitchy taut feel, but not the desired dramatic effect.

Drawn from A. J. Quinnell’s novel, Man On Fire appears to be a true life story of brutally responding to widespread crime and corruption in Mexico. Two stories separated by a kidnaping seem to make for a marathon tale that plays like a hyper, often operatic opus which bears similarity to Scott’s Revenge without the sex, but just as violent.

The first one has Creasy just over the border from El Paso to meet with friend and former colleague Rayburn, played with his usual charm by Christopher Walken. Rayburn lines him up to be a bodyguard to 9-year-old Pita Ramos, the adorably precocious Dakota Fanning of Uptown Girls. Her parents, Marc Anthony’s jaded industrialist Samuel and his American wife Lisa, acted with motherly assurance by Radha Mitchell of Phone Booth, acknowledge Creasy’s drinking problem, but know instantly he’s capable of completing his assignment. Urbane family lawyer Mickey Rourke has told Sam, there is an urgency for protection with nearly 24 kidnapings in the last week.

Pita pesters Creasy about his life, and gets him to take an interest in hers, becoming a friend as he smiles and helps her overcome her fear of getting of the block for an important swimming meet. She gives him a bear that opens up to reveal a gift of a St. Jude medal. But, once her parents are away and Sister Anna (Angelina Pelaez) tells Creasy he’s her “father” today as he takes her to parochial school, things go drastically awry. Pita is abducted after a shoot-out that leaves Creasy critically wounded. At that point Scott moves Washington into a more visceral, avenging, even sadomasochistic realm.

His vow is to “kill anyone involved in or profiting from the kidnaping.” The narrative by Brian Helgeland schematically has Creasy on an unstoppable, methodical bloody march of justice with Pita presumed dead in a tradeoff with another victim. Creasy finds clues to infiltrate lairs and a wild rave party with the help of a fearless reporter (Rachel Ticotin) of the paper “Reforma” who is close, personally and professionally, to a police inspector, played by Giancarlo Gianni, seen in Hannibal.

Scott gives Washington a chance to show how cruel Creasy can be in completing his vengeance and answering Lisa’s fitful wishes. Unfortunately, when Fanning leaves the action, the edgy film makes with a lot of quick cuts that are more nagging than entertaining, as the sight of a shot of Creasy drowning in a pool is a reminder of a man who has played a dangerous game with his life. Man On Fire finally leads its remaining characters to their rightful places, but in an overproduced, protracted manner with too many snazzy e-mail-like subtitles that sometime even relay English dialogue.