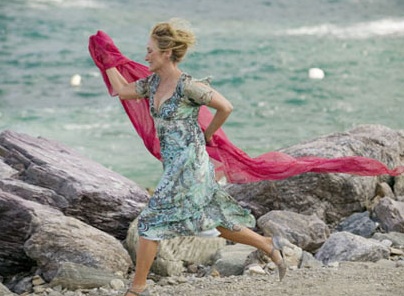 
Director Phyllida Lloyd brings the popular musical, based on the Swedish group ABBA's songs, to the big screen.

Meryl Streep throws herself into the part of Donna, a singing and dancing free spirit. She swings her arms, jumps up and down on beds and belts out songs (quite well, buy the way) with a devil-may-care attitude.

She runs a small inn on a beautiful Greek Island where she lives with her daughter Sophie (Amanda Seyfried) who is about to be married. Everything is great until Sophie invites three of her mother's lovers from 20 years ago in order to find out which one of them is her father.

Colin Firth, Pierce Brosnan and Stellan Skarsguard show up as the prospective dads. They also dance and sing but with less success than Streep. It becomes quickly apparent that the cast, with the exception of Seyfried who has a lovely voice and Streep who does a good job, were not hired for their singing abilities.

A musical is meant to make us feel good when leaving the theater - this one does just that. Streep is unpredictable and her carefree performance is infectious. So, join the gang, sing along with the cast and have a good time!