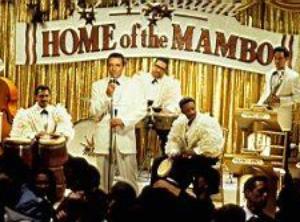 
The Mambo Kings is the story of two brothers who love each other but have different dreams and aspirations. Their drama is played out against a background of tension and pulsating beat. The music and dancing is fast, loud and romantic.

Armand Assante ("Q and A") plays Cesar Castillo and Spanish actor, doe-eyed Antonio Banderas plays his younger brother, Nestor. The men are members of a Cuban mambo band. Cesar is bandleader and plays drums and Nestor is songwriter and plays the trumpet.

After being threatened by a club owner in Havana, the brothers move to New York City to find fame and fortune in the dance clubs that were popular in the 50's.

Cesar grabs at life with both hands, he's sexy, passionate and experiences everything at the fullest, whether it's smoking the largest cigars, hitting on every woman in the room or dancing up a storm. Nestor, on the other hand, is a dreamer, he pines for Cuba and the girl he left behind, his beloved Maria.

First time director Arne Glimcher successfully recreates the smoke filled clubs with beautiful women and slick men moving to sensual rhythms. Banderas gives a sensitive portrayal and Assante's performance is electric, he's animated and spirited. Assante brings an urgency to his acting he's like a magnet drawing your attention to him whenever he's on screen. It's a terrific musical drama, filled with great performances. One of the year's best.