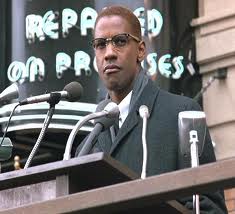 
Spike Lee has directed the best film so far this year.

The life of Malcolm X who, known at various times as Detroit Red, Satan, El-Hajj Malik El-Shabazz, is a classic tragedy; he moved from a wayward youth to a young criminal to a radical and eventually toward a man of peace. His rise to power, however, was too fast and he failed to understand that radicals lose because they cannot perceive any other view. When Malcolm saw the other view, upon his return fro Mecca, it was too late to save him.

Played on the backdrop of the United States in the 40s, 50s, and 60s with some flash backs to his childhood in the 30s, he experienced ignorance of racism from the Ku Klux Klan to the police establishment in New York and Boston. The film is at its best when it deals with his personal life and relationship with his wife, Betty Shabazz (Angela Bassett), and their struggle to balance his public and private life. The tension of his compelling inner drive to spread the word and gain converts stole his freedom in a way that society could never do.

The production is filled with music from each decade. The 40s music is most enjoyable, perhaps because it is the only time when Malcolm was free and natural and the music reflects his youth without his future agenda. Lee again uses the camera in innovative ways. In an early scene Klan members appear to be galloping into the moon, which is enlarged on the horizon. Views of characters from above and twisting, turning cameras add an extra dimension, as does the use of cameo appearances by modern day world civil rights leaders.

The film is long but it moves smoothly and quickly and there is nothing that could be removed except a preaching segment near the end. It is an American story which will not create converts but which demands respect for the man and his life.