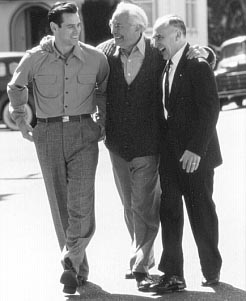 Director Frank Darabont brings us back to one of the old majestic movie houses that flooded the nation in the forties and early fifties.  In doing so he extracts Jim Carrey's best performance to date and leaves us feeling good, but with tears in our eyes.

Jim Carrey's Peter Appleton, a writer of B movies like The Sand Pirates of the Sahara, is subpoenaed by a Joe McCarthy type, U.S. Senator played by Hal Holbrook.  Having attended a suspicious meeting when in college Appleton is forced to name names to save his career.  Confused and angry he takes a ride up the California coast, crashes his car and wakes up on a beach with James Whitmore's pipe smoking Stan looking over him.  Stan takes him to the town of Lawson and David Ogden Stiers' Doc cares for him.

The town of Lawson lost sixty two young men in World War II, but when Appleton hits the town he is immediately recognized as the son of Martin Landau's Harry Trimble.  Landau expresses his feelings without a word when he believes he has young son back from the war.

Harry has allowed The Majestic, the local movie house, to become dilapidated but quickly becomes determined to reopen with the help of his son who is called Luke.  Everyone in the community is rejuvenated by what appears to be a miracle.  And Adele (Laurie Holden), Luke's girl friend pitches in more than any one else.

The power of this return is perhaps difficult to understand, but I remember when my uncle returned from World War II and everyone in the family and neighborhood was waiting for him to reach the top of the hill at my grandmother's house.  It didn't matter that I was very young - every minute of that reunion remains in my mind.  He came back and in The Majestic everyone in Lawson had a piece of their relative who didn't return back in town, when Luke Trimble came home.

The Majestic is rebuilt and reopened showing An American In Paris, the 1951 Academy Award winner for best picture.  As time passes the audience is treated to other films like The Day the Earth Stood Still and Peter Appleton's The Sand Pirates of the Sahara.

Good things don't last and the idealistic town is in for a shock as is Peter Appleton, but at that point, after we have been treated with an opportunity to watch a happy small town work, we get to see Carey act like Mr. Smith in Mr. Smith Goes to Washington, and an entire town work through wrenching emotions with a Frank Capra style ending that easily brings tears and joy.

It's A Wonderful Life at The Majestic.