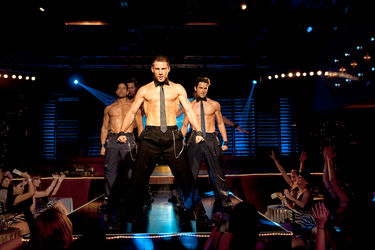 
Steven Soderbergh (over the past two decades and then some) has done the kind of films that allows him to experiment in the creative filmmaking process, ones like Ocean's Eleven and Contagion. Now, he's made one that's loosely based on Channing Tatum's pre-Hollywood stardom days in the adult filmmaking industry which takes place over a long sultry summer.

Magic Mike is a fairly effective, albeit racy and insightful drama that the director modulates what doesn't become a male Showgirls in a raw, sprightly behind-the-scenes fashion. It has the kind of jazzy ebullience (aided by music supervisor Frankie Pine) seen in many of his works like his interesting work with Matt Damon in The Informant!.

Tatum (who starred opposite Gina Carano in the director's Haywire and also comedically successful in the buddy high-school comedy 21 Jump Street) is becoming a favorite of Soderbergh who seems to have a fine eye for sensing the right kind of talent in his projects; here a male camaraderie is key for another rise-and-fall saga with a nice washed-out look away from the interiors set in Tampa Bay.

Here, the title refers to the stage name of Tatum's Mike Martingano, giving the ladies what they want at a run-down Tampa exotic club Xquisite. The manager is the leather-clad Dallas (Matthew McConaughey of Bernie and The Lincoln Lawyer). The slick entrepreneur is planning to move his business to South Beach and has a nice financial proposition for his most lucrative male dancer who wishes to choose that path.

Mike, who has made friends with his not so young beefcake colleagues - Tarzan (Kevin Nash), Tito (Adam Rodriquez), Ken (Matt Bormer) and Big Dick Richie (Joe Manganiello of HBO's True Blood), actually has designs on a customizing furniture business. There's also the prospects of his getting together with Brooke (Cody Horn). She happens to be the sister of the newbie (19-year-old) Adam (Alex Pettyfer) dubbed The Kid played by Alex Pettyfer of Beastly and Salt.

It turns the important relationship in the film is the one between Mike and The Kid as the latter splurges on the perks of networking through exposure in his new venture. Tatum and Pettyfer play off one another well enough as dilemmas and quandaries are mutually felt with both ultimately in need of a soulful cleanse, with the former adding a silky, if vulnerable resolve to an arguably arousing part. The tall buff actor (also sharing producing credit) shows maturity in a tricky part no matter his closeness to the material and gets to exhibit some of his earlier Step Up expertise as some solo and group stripping can easily be welcome for a receptive audience.

A fleet-of-foot farrago for some, a riveting examination/insider for others has the markings of an intimate semi-autobiographical incursion on a difficult not so predictable course with Soderbergh operating the Red Digital Camera. He again goes under the nom de plume of editor Mary Ann Bernard and lenser Peter Andrews to bring an edgy naturalism that keeps one interested in the conversations and on the fringes of the widescreen frames that esteemed auteurs like Quentin Tarantino and the late Robert Altman would admire.