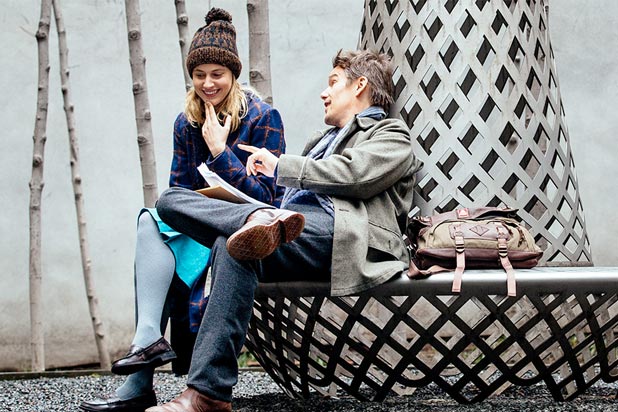 
Rebecca Miller produces, directs and writes this mannered, yet successful offbeat Big Apple-based rom-com after a seven-year absence from behind the camera.

Maggie's Plan might have the influences of Noah Baumbach or notably Woody Allen given some of its relational angst, but Daniel Day-Lewis's wife expresses a modern worldview which may counter the genre conventionality.

An interesting triangle develops after the titular character, a university student advisor looking for motherhood though unable to sustain romance for more than have a year yields to the attraction of an adjunct self-absorbed professor working on a long-gestating self-biographical novel also working there. Greta Gerwig (Lola Versus, Greenberg) and rakish man-child Ethan Hawke (Good Kill, Boyhood) as unhappily married John (with two kids) become involved after Maggie's decision of artificial insemination with a pickle entrepreneur (Travis Fammel) once a math major goes awry after a visit to a studio apartment.

Some may have to suspend some disbelief for the serendipitous nature of the plotting, but it does resonate well with the characters, as the tale jumps three years forward with Maggie and John in bliss, more for him than her. The tale ultimately pivots on a meeting between Maggie and John's "imposing", more professionally accomplished former Danish wife, Georgette,  as bun-back coiffed and Teutonic sounding  Julianne Moore (Freeheld, Still House) displays a welcome droll flair that takes over the last third of a movie that may follow to a certain degree the line, "the best laid plans..."

In its way around academia certain cineastes will be drawn to this orbit even if this Plan may be Miller's most mainstream effort to date. Fine underlying efforts come by way of Bill Hader's Tony and Maya Rudolph's Felicia as spousal sounding boards who aren't afraid to tell it like it is. Gerwig may be more of a straight character here but Maggie's choices, as ill-advised as they may be, doesn't lower any sympathy towards her. Same for Hawke's needy, though vain struggling author. And, Miller's craft contributors astutely complement the ebb and flow of the storyline from the smooth editing. pleasing lensing, and prudent score and choices (including a Bruce Springsteen chart-topper) to make for mostly breezy, thoughtful cinematic fare.