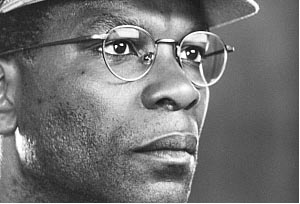 The story of Patrice Lumumba who was Congo's first elected prime minister in 1960 is one that isn't well known.  But this fictionalized account, directed and co-written by Raul Peck, is riveting and burns indelibly through the explosive performance of Eriq Ebouaney.

This leader's back story of his rise and popularity within a constituency is shaded over in favor of the principles and idealism which made him a supreme force of the Belgian Congo's independence.  Peck opens Lumumba with the African nationalists (French speaking) being horrifically murdered in 1961 by Belgian troops after just months in charge of the newly freed Congo.

The posthumous words of a slain man of the people lingers in a timely film as the Congo is today in the midst of an ongoing bloodbath, as a country is divided through arguably the largest conflict in Africa as earlier this year president Kabila who supported Lumumba was assassinated in coup-de-tat fashion.

Lumumba has strong characters around a betrayed man with historical figures like Joseph Mobutu (Alex Descas) and president Joseph Kasavubu (Maka Kotto).  After a night in Katanga where nobody knew what really happened to Lumumba and two companions who were mutilated and burned, the memory of a man who was a problem for Belgium's mercantilism and the CIA surfaces within the complexity of fiery events made compelling by those who lived them.

Probably having the impact of a stirring activist with the charisma of a Hurricane Carter, Lumumba becomes highly sympathetic with those who would support him in Stanleyville, now Kisangani, where he once hawked beer after beating a larceny conviction which helped his name politically.

Director Peck doesn't deliberately take the time to make the history as meaningful as the traits of a leader whose commitment clashed with imperialists.  Ebouaney has the visage of a Malcom X, self-assured, but rueful of the fact that all he has worked for is being torn down by conspirators that aren't just old enemies.

Amid the graphic outbursts of the Belgian army the fusion of Cold War politics offers some ambiguity as Katanga became a confederacy of sorts, a lush province of mineral deposits.  Yet, as hyper-real as the story is, Peck works strikingly with Ebouaney whose presence sticks with you like a thorn that conveys what drove him to tenaciously incite a country in the dark shadows of a small European nation.  The vision with which this actor cogently expresses makes the past and present collide chillingly, countering incoherence with an outcry against a nightmarish colonial existence.