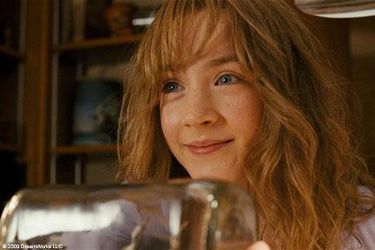 
Saorise Ronan is Susie a young murder victim who tells her story as she observes her world from the in-between place between Heaven and Earth. For Ronan her role is similar to her Briony who attempted to tell a better tale of the lovers in Atonement. Each film has scenes that are far more hope and dream than reality.

Ronan's Susie is a happy stable ordinary looking early adolescent girl with blondish hair and piercing blue eyes. She is entranced by a first love, is full of joy and life and trust. She brings that giggle, almost silly but confidant atmosphere around girls her age but doesn't want to wear a knitted hat to school and has yet to land firmly on her emotional feet, but we know she should do fine.

On a fall day Susie is killed in a makeshift shelter below a fall cornfield in Pennsylvania. She then narrates the remainder of the story from death before she reaches Heaven. The murder scene, in contrast to her carefree family life and her dedication to photography (which provides clues to her killer at a later date), is dark filled with moody orange light from candles. It is the place George Harvey (Stanley Tucci) has carefully constructed to capture this vibrant young girl. Director Peter Jackson brings tension and chills to the murder scene rather than shock as the killer slowly manipulates her until she can no longer escape.

The terror and unforgiving pain drives her parents (Rachel Weisz and Mark Wahlberg) each not coping in different directions. Dad is filled with anger and mom can not function. Jackson is able to mold his performers emotional displays so we feel more than what we see of the distruction occurring in their lives. Sister Lindsey (Rose Mciver) who had natural sibling rivalries with Susie copes better as she begins to understand who the killer probably is. Her scene in the killer's house brings us to the edge of our seat.

Jackson creates the other world with stunning art and special effects which fill the screen with color, beauty and images that reflect her journey from life to the final place. Scenes of leaves and birds and a rolling green Earth ball which she traverses are played against her body floating in air and water. Holly (Nikki SooHoo) is a friend who connects with Susie and attempts to guide her away from her Earthly concerns and to her final destination. Later we learn the connection between Holly and Susie is not just accidental.

Holly suggests forgetting the past but Susie continues to look back and tell her story. She tells of her Grandmother's visit. Susan Sarandon invests in the hard drinking smoking older woman who is directly honest with everyone but can comfort Weisz who is her daughter.

While they all live on a nice shady lane one house is occupied by killer, who is the most effective villain on the screen since Jackie Earl Haley's Academy Award nominated child molester in Little Children. He brings fearful shivers to a degree of palpable fear as we watch him maneuver Susie and learn of his other exploits from the past. The story drops clues early as to where her body is but we only learn from flashbacks how the killer disposes of Susie after the killing.

Peter Jackson who appears in the photography store brings us to a dark world that a little girl traverses, dwells in and rises above from the next world. The devise of using the victim who continues in a different life mutes the darkness of the script as we discover what happened to Susie. It lightens the impression of murder, but it might not bring solas to relatives of such victims. None the less this is a powerful, compelling film beautifully presented by its director.