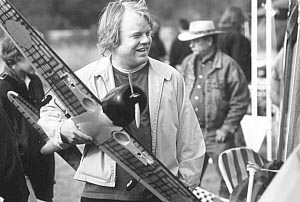 Philip Seymour Hoffman finally gets his first starring role in the darkly intriguing Love Liza, which plays like a tragicomedy, and pivots on a morbid act that takes Hoffman's Wilson Joel on a very gloomy road.

The always busy Hoffman has made over 35 films and is impressive in Spike Lee's gritty, metaphorical 25th Hour as an unhappy English professor dealing with personal issues as his friend is about to serve seven years for dealing drugs.

In Love Liza, Hoffman is a little boyish with long blonde hair.  The movie begins after Wilson's beloved wife, Liza, has taken her life.  And he doesn't want to exacerbate the pain by reading her last works.  Kathy Bates is Mary-Ann, Liza's mother, and her son-in-law resists her advances toward understanding what brought about something so sudden and horrible.  Wilson turns away a flirtatious colleague (Sarah Koskoff) who is interested in more than helping him create web sites.

Working loses significance in Wilson's existence as he starts a habit of huffing gasoline fumes from small containers thus etching a portrait of a man who looks like a lost teenager.  There is a noticeable credibility into how compulsion leads to a fib about model airplanes and an excursion to a Louisiana convention.

An unusual, elderly fellow who has a healthy passion for building models (Jack Kehler) acts as a sagely presence for Wilson.  But the dazed fellow goes overboard during a sanctioned racing of some fast model boats.  Love Liza goes along its peculiar morbid zombie-like state until Wilson finds out he's not alone in his copious visiting of service stations.

Perhaps the dramatic side is less convincing than Hoffman who hopefully will be loved by casting agents who can give him some more substantial comedy and pathos to really master rather than flying like a wistful eagle in Liza.  How high Hoffman gets given his character's eccentric fascinations might finally get him on the right track to be fit to rise above the haze as more than an underrated, hardworking character actor.