Love And Other Drugs 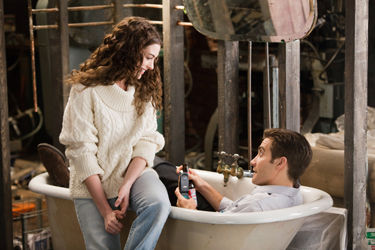 
Edward Zwick's new film isn't as sharply rendered and fair-minded as some may wish, but it has enough energy frothing into its comic and dramatic sections while unable to be an emotionally complex, serviceable satire.

Love And Other Drugs stars Jake Gyllenhaal (Prince of Persia) and Anne Hathaway (Alice In Wonderland) and is loosely adapted from a memoir with the subtitle The Evolution of Viagara Salesman. So, this initially ebullient tale is relatively current, letting one into a not-so-familiar industry which is highly competitive.

Gyllenhaal's Jamie, a son of a doctor, is a pariah in a successful clan. Yet, he has a charismatic way about him that makes him an ideal salesman and a ladies man, even without stability in his professional life. A commitment-phoebe of sorts dealing Pfizer drugs in the Ohio River Valley.

Jamie's life is given an about-face as he meets a young dilettante artist in Maggie (a spirited Hathaway) and an opportunity to hawk a new, cutting-edge male performance enhancing drug (with more than its share of side-effects).

Zwick and his writers, including cherished partner Marshall Herskowitz, struggle to find the right tone of what seems like a romantic comedy on the surface (or at least from the marketing campaign). It earns enough interest from a dysfunctional, ambitious life of a salesman and the interplay with those in the medical profession. In terms of its characters, especially the central ones, a sense of undernourishment prevails.

For a while, there is some vibrancy between Gyllenhaal and Hathaway, as their combustive meet-cute relationship with the latter having the onset of Parkinson's during an examination by the unctuous Dr. Knight (Hank Azaria) begins.

Able backup is provided by Gabriel Macht (The Spirit) as rival salesman Trey and Josh Gad offers comic relief as Jamie's overachieving, young brother Josh as well as the reliable Oliver Platt (2012) as Jamie's new boss. But, it's up to the ardent leads (appearing together again after the richer, very poignant Brokeback Mountain) to do the heavy lifting and they seem to make the most of their more heated moments onscreen.

Yet, what results isn't the potent cinematic cocktail it purports to be as it appears to commit as many breaches as some of its dubious characters The winsomeness of Jamie and Maggie starts to wane even before they are given the lowdown about an increasing affliction at a convention with others touched by it. The harder Zwick and his adequate production staff try to gussy it all up with a crisp, luminous sheen (like Maggie) one can't help feeling that this likable "Love" was incorrectly diagnosed and treated with too much soapy medication.