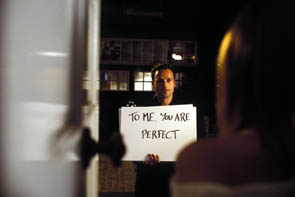 Love Actually is a feel-good romantic comedy for the yuletide season from Richard Curtis, the esteemed scenarist of Bridget Jones's Diary, Notting Hill and Four Weddings and a Funeral. His first feature recapitulates some of themes of these popular films with a challenge that Robert Altman proved very successful with in films like Short Cuts and Gosford Park.

Apparently, if one doesn't have interest in the vignette of Hugh Grant's Prime Minister infatuated with one of his assistants (Martine McCutcheon), then there will be John (Martin Freeman) and Judy (Joanna Page) having a relationship as nude body doubles. Colin Firth is a reclusive writer who becomes smitten with his Portuguese maid (Lucia Moniz) who doesn't speak English.

Curtis fills his comedy with the uneven nature of the many love-struck Brits. It's not all romance for Emma Thompson's Karen, the sister of Grant's Prime Minister, as the screenplay measuredly counts down to Christmas over a five-week period. The happily married wife and mother will eventually find out the clandestine ways of her designer husband Harry (Alan Rickman). Harry's employee, Sarah (Laura Linney) is prodded to act on a crush harbored for more than a year, but is hampered by the calls on her cell phone from her institutionalized brother. Liam Neeson is a father helping his son deal with the loss of his wife/mother with a warm video tribute at her service. And, one of the other nine tales involves Mark (Andrew Lincoln) having an unrequited love with Juliet (Keira Knightley of Pirates of the Caribbean), who has just married his best friend.

There is a roundabout emotional pull that gets to the bottom of Grant's opening voice-over about greed and hatred taken to task with love that's everywhere. One of the bright spots of Love Actually is the crass Billy Mack, done with wit and kidding by Bill Nighy. The aging rock star is captured in rare form during interviews and performs a cover of "Love Is All Around" changed to "Christmas Is All Around." It would have been more work to pair down some of the material, because all the characters must end up in a moment like the one Grant embarrassingly had in the touching About A Boy. In spite of all the star presence and cheerful, salty exuberance buoyed with three cases of more serious drama, Curtis' present to moviegoers is undersigned with a crammed heartfelt message.